recent
Reportage on issues related to the withdrawal of US and NATO troops from Afghanistan has given minimal coverage to the experiences and perspectives of the Afghan people, and even less to women’s particular needs and perspectives. The interview from McLean’s posted below is a welcome exception.

Afghan women’s views have been the clearest, most forthrightly varied and potentially constructive of all the verbiage about what is to come. The Global Campaign for Peace Education brings you the views of two who have courageously undertaken to prepare their fellow citizens for participation in determining the future of their country.

The two voices are distinct, yet both Sakena Yacoobi and Sima Samar emphasize the need for civic participation, and the fundamental necessity of education as the foundation for the democratic development of Afghanistan’s future.

Peace educators have professional and civic responsibility to call the international community to undertake to assist in fulfilling fundamental education needs as defined by the Afghan people themselves, and to assure the security essential to both education and civic participation. BAR, 7/7/21

How to end the endless war in Afghanistan

Afghan human rights leader Dr. Sima Samar talks to Sally Armstrong about the Taliban, the peace process and the fight to save 20 years of progress in her country.

“This entire peace process has gone on without the [Afghan] people. Civil society and women’s groups have started initiatives to consult with Afghans but getting their ideas to the negotiating table hasn’t happened yet. The people want what they have always wanted, a chance to live in peace without terrorist threats and sticky bombs being stuck to their cars and blowing up their families.”

There is a storm brewing in central Asia and the centre of the disturbance is Afghanistan. While the diplomats in the international community have pledged financially to stay-the-course in the never-ending war in that country—it takes US$5 billion for the government to operate and another $5 billion for the Afghan military to stay its wobbly course—the citizens of the world, once drawn to the rescue of the Afghan people and the rebuilding of their crumbled institutions are taking a pass in the current debacle. In short, the world is fed-up with Afghanistan. The so-called peace talks with the Taliban are dangerously flawed. America now plans to withdraw its remaining troops by Sept. 11.

Maclean’s asked Dr. Sima Samar the Afghan woman who defied the Taliban when they came to power in 1996 and called on the world to rescue the women and girls from their draconian edicts, to explain the very troubling situation in the place that claimed 168 Canadian military and civilian lives. Samar is the founder of the Afghanistan Independent Human Rights Commission. She was appointed by UN Secretary-General Antonio Guterres to the High Level Advisory Board on Mediation and the High Level Panel on Internal Displacement.

Q: Whose fault is this debacle?

A: It’s everyone’s fault: The Americans and the international community for allowing a peace process to be conducted with the Taliban and without the government that represents the people of Afghanistan. It was doomed to fail. And it is also our fault as Afghans because the lack of unity in our country made us unable to take the lead in the peace process.

Q: Do you fault the Americans for wanting to get out of the longest war they have ever fought?

A: The Americans want to get out of Afghanistan but they don’t want to leave chaos behind. Under President Trump, they formalized an agreement on Feb. 29, 2020 that would declare peace—but they didn’t care who that so-called peace was with and subsequently gave the Taliban the image that they have the power, that they are the winners of the war. The whole world knows what the Taliban did. How could they ever be seen as victors? This was a colossal betrayal of the people, and particularly of the women and victims of war.

Q: Can President Ashraf Ghani’s office save the day?

A: No. Unfortunately, his unity government is not uniting the people. There is endless political bickering in the president’s office which seriously undermines the work the negotiating team is doing in Doha, Qatar where these talks have been held so far.

Q: What do the Taliban really want?

A: They want an Islamic Emirate. Although we already have an article in the constitution that states no law can be above Sharia Law, the Taliban insist on their version of Sharia law which is what we saw when they held power from 1996 to 2001. There is no place in the Quran that says girls cannot go to school and women cannot go to work. There is no other Islamic country that uses this kind interpretation of Sharia. Even in the strictest countries, girls can go to school. At the peace table they will not be precise about how they will interpret Sharia. They simply say, “all will be according to Sharia.” But everyone knows what is coming.

Q: What about the Afghan people, what do they want?

A: Nobody has asked them. This entire peace process has gone on without the people. Civil society and women’s groups have started initiatives to consult with Afghans but getting their ideas to the negotiating table hasn’t happened yet. The people want what they have always wanted, a chance to live in peace without terrorist threats and sticky bombs being stuck to their cars and blowing up their families. Part of the Taliban strategy is to keep up the violence—the murders and bombings—to put pressure on the government while the negotiations are taking place. It’s hard for people to come together, to show solidarity when terrorists are on the street targeting women and the leaders of those terrorists are negotiating with the Americans.

The Americans brings human rights and minority rights and women’s rights to the table which is a positive force but look the other way in the face of this horrendous violence and claim a cease fire is coming. When a peace process is not owned by the people it will not be sustainable.

Q: This feels like an endless war. The international community has been involved for 20 years. Why can’t the country find peace?

A: The answer is simple. Pakistan has been waging a proxy war against Afghanistan ever since the Soviets left in 1989 and no one wants to deal with that truth. They harbour the Taliban openly in Quetta and Peshawar. The Taliban fly to Doha for the meetings with the Americans out of Pakistan. And that has consequences: it’s a message to the countries in the region that there are gains to be made outside their own borders.

Q: The entire region is shifting and shows a worrisome level of instability. How does that affect the peace talks?

A: Because everyone in this region is related—from Syria and Iraq and Yemen to Turkey and Iran as well as Pakistan, India and the “stans” [Turkmenistan, Uzbekistan, Tajikistan]—these are almost all Islamic countries that have some connection to al Qaeda and history has shown us that they are looking for training grounds for radical Islamists who oppose their own governments.

Q: What does this matter to the rest of the world?

A: Insecurity in this region means a surge of refugees seeking safety elsewhere, drug trafficking burgeoning and global terrorism flourishing. The countries in this region share common marks of instability: economic hardship, organized crime, environmental degradation leading to poor crops and poverty. It’s a formula for trouble and instability.

Q: There’s a lot at stake. Can the Afghan people pull together to respond as a nation?

A: If we could come together united, we could solve this problem. War has always been a destructive force in my country. But even in the peace process, we are very divided. You can blame it on lack of education and lack of development which keeps people from bonding together, but this current problem goes back to 2004 when we were drafting the constitution. Political parties plus the mujahideen and the tribal leaders were all in the same tent vying for power. The mistake made then was that the people who had destroyed the country during USSR occupation and the civil war that erupted after the Soviets left in 1989 were never held accountable for their crimes, and the culture of impunity continues. The leadership uses the strategy of divide and rule and fails to unite the people.

A: It’s up to the government of a country to hold the people together. Our government is not strong at this time. While the people choose President Ghani over the Taliban, he has lost his popularity as a unifier, as a reformer. Today we need a commitment by the United Nations, the international community, the Americans and the NATO forces to push the country to democratization and to a clean election. If there is no mechanism to keep that process moving with fairness and justice for all, we will fall again to civil war.

Q: Are you worried?

A: I am very worried. Look at what we’ve accomplished in the last 20 years: the institutions we have built, the human rights record that’s in progress, the schools filled up again with girls and boys, women taking their rightful place beside men in government and business, a flourishing media. After all that, after building a democracy, we could lose all of it. And that would not only be a loss for Afghans but a loss for all people and countries who believe in human rights and democratic values.

“Why education? Women are agents of change. Women are transforming people all across the country.  And that’s the reason we are teaching.” – Sakena Yacoobi

On June 21, 2021, the Afghan Institute of Learning and Creating Hope International hosted a conversation with an honorable panel of incredible women; discussing current situations, hopes & the future of Afghanistan.  Watch the event video below. 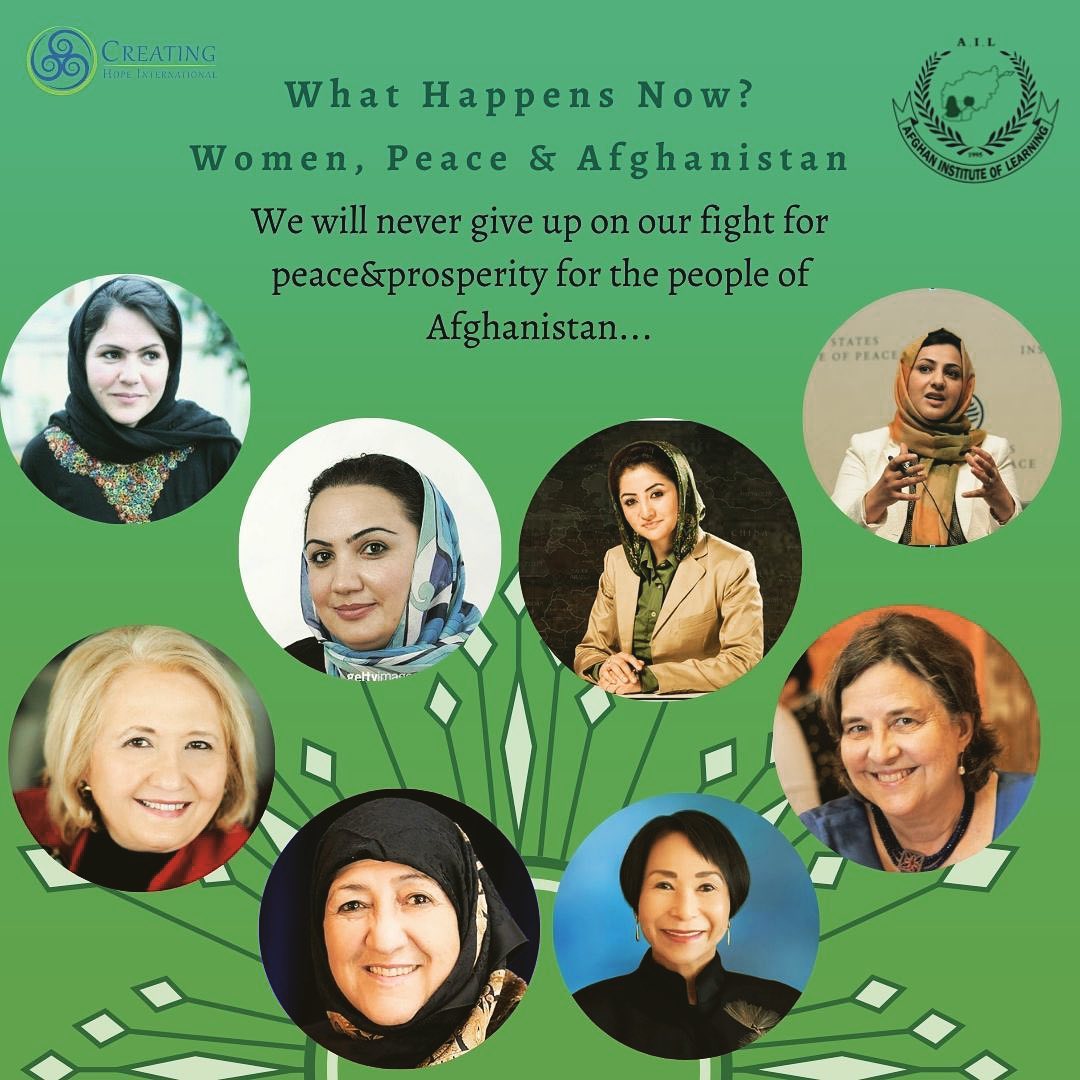 The Joan B. Kroc Institute For Peace & Justice at The University Of San Diego’s Kroc School Of Peace Studies: Accepting Applications for Women PeaceMakers Program

The new Women PeaceMakers Program will offer a unique fellowship for peacebuilders, focused on strengthening and improving peace efforts in conflict-affected communities around the world. The 10-month fellowship will do this through building an engaged community of four peacebuilders from conflict-affected communities and four international peace partners looking to transform their ability to build peace together. Application Deadline: May 31, 2017. [continue reading…]

This open letter from one professional woman to another, an Afghan university administrator should challenge all American women to confront the consequences of the abandonment of those most prepared to guide Afghanistan toward constructive membership in the world community: the educated, independent women responsible for gains in social equality now trampled by the Taliban. With the help of the White House Office charged with gender issues, the original, un-redacted letter addressed to Vice President Kamala Harris has been delivered to the Vice President’s office. We hope it will also be read and discussed in courses in peace studies and peace education to give voice to the untold women in Afghanistan in the same circumstances as the writer, some of whom we hope will find places in our colleges and universities. [continue reading…]

“Thinking about how the world might be and envisioning a society characterized by justice are the essence of conceptualizing the conditions that comprise positive peace. If we are to educate for peace, both teachers and students need to have some notion of the transformed world we are educating for.” – Betty Reardon [continue reading…]