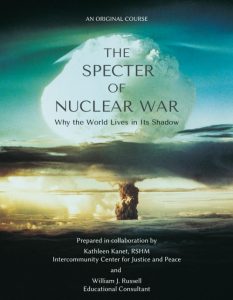 I want to share with you a special course curriculum devoted to how we humans decided to create and then to use massive new atomic weapons against other humans in the 20th Century.

The course was completed in 1980 around the time that the United Nations General Assembly held its first Special Session devoted to Disarmament. Unfortunately, this course titled “The Specter of Nuclear War: Why the World Lives in its Shadow” is as relevant today as it was 40 years ago.

As a long-time peace educator, I believe this syllabus to be very unique. It was created by William James Russell, a master teacher and curriculum designer, and a wise and learned man.  It employs a dialogic methodology demanding critical thinking, analysis, and value-oriented consideration. It covers how the bomb was built, who developed it, and an evaluation of the responsibility of the bomb’s creators.  It also looks at how decisions after its terrible use in Japan continued into an ongoing arms race among countries.

I believe that “The Specter of Nuclear War: Why the World Lives in its Shadow” has great potential today to further students’ critical thinking about the decisions people in our country made many years ago and how we still live in the shadow of those decisions.

If you, as educator, find something of value in this for your work and mission, please use it. Please share it with others. If there is a way to credit William J Russell as author, please do so.

During the time William was developing this course he and I were in consultation.  I was the School Program Director at the Intercommunity Center for Justice and Peace (NYC) and he was a mentor to me for many years.  I believe this course is still of great value as a way to ignite new dialogue about the continual development and potential use of nuclear weapons in our world.

Download “The Specter of Nuclear War: Why the World Lives in its Shadow”