For content-based teachers, it can be a challenge to find good real-world themes that practice English language skills and inspire students with stories of people who have worked for a better future. One such topic is the Nobel Peace Prize.

The Nobel Peace Prize offers a number of benefits for language classrooms. It’s a high-interest topic that occurs annually and enjoys international media coverage. It engages the curiosity of learners of all ages. It can involve a variety of language learning tasks. In addition, it stimulates student interest in world affairs, promotes global awareness, and fosters social responsibility.

There’s a wealth of activities available for teaching this topic, from quizzes and games to readings and research tasks. Following are some that I have used in my classes. Feel free to try these out or adapt them as necessary.

When starting a new theme, it’s good to engage students with a challenging task to find out what they know. To begin this teaching unit, put students in pairs and give them the following quiz (Appendix A [.pdf], answer key included). Test your knowledge by trying it yourself! 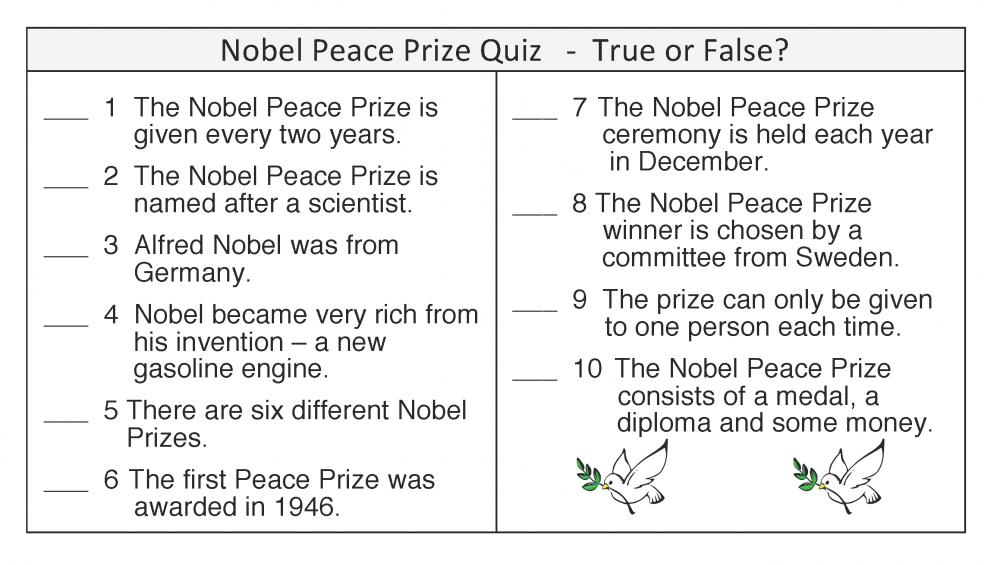 After the quiz, it’s time to learn about Alfred Nobel and the international prizes he established. To teach this, I designed the following reading passage with comprehension questions (Appendix B, .pdf). 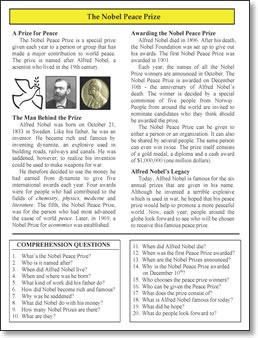 Once students have a basic idea about Alfred Nobel, it’s time to focus on the recipients of his annual peace prize. To do this, put students in groups and have them brainstorm any peace prize winners they know. Next, pass out a master list of all peace prize winners from 1901 to 2019, such as the one I created here: Appendix C (.pdf).

Students are always excited to look through this list and to see the names of all the peace prize winners. The list can be used for a variety of activities:

Scavenger Hunt Homework (Find someone who…)

Another way to engage students with the list is to play a “Guess who?” game. For this, I created a set of eight profile cards (Appendix D, .pdf). Here’s what to do: 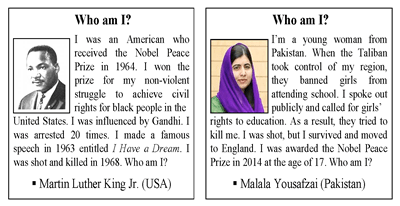 Finally, to develop research skills, I have students choose three winners from the list, research them, then write a report or give a presentation about each:

Another way to learn about peace prize winners is to study quotes that they’ve made. Following is a sample (Appendix E, .pdf). Have students read the quotes, choose the two they like best, then discuss—in groups—the quotes they chose and why.

All peace prize recipients give acceptance speeches at the Nobel award ceremony in Stockholm. These can be a great source of material for advanced classes dealing with reading, listening, or public speaking. Video recordings and written texts of selected acceptance speeches can be found on The Nobel Prize website. 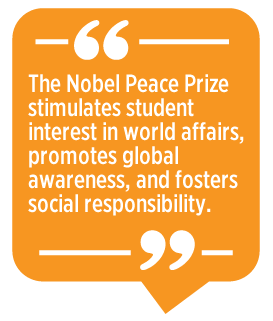 If you’d like to get students more involved, why not have them predict the Nobel Peace Prize winner(s) for the coming year? Break them into groups (e.g., one for each continent), have each group research and present possible candidates, then choose the best one(s). The official recipients are announced each October, so students can compare their choice with the actual winner(s).

Another idea is to run your own “classroom peace prize.” Have students research (and, if possible, interview) peacemakers from your community, city, country, or region. Have students give presentations on these people or groups, then vote as a class for the one(s) to award your class prize to.

The Nobel Peace Prize is the world’s most famous award for peace. However, it’s not the only one! Extend the unit by having students research, write, or present about other peace prizes around the world. Examples could include:

For other prizes and more detailed information, see Wikipedia’s “List of Peace Prizes.”

In my 25 years of teaching the Nobel Peace Prize, I’m always touched by how positively students respond. They’re especially impressed by the diversity of the laureates. And no wonder! Nobel Peace Prize winners comprise dynamic individuals and organizations that have worked to stop wars, fight prejudice, end poverty, defend human rights, promote tolerance, and protect the environment. They include

I hope the activities here show the potential the Nobel Peace Prize offers as a theme for content-based English classes. Many more activities are possible: role-plays, film clips, matching tasks (Match the winners to their actions) and debates (Did they really deserve to win?). Further ideas can be found on The Nobel Prize website, which has a section devoted to Nobel Prize Lessons, or through an online search for “teaching the Nobel Peace Prize.” Please feel free to contact me if you’d like a copy of the Nobel Peace Prize PowerPoint I use in class or to share your experiences with this topic

By teaching this important theme, we can introduce our students to individuals and groups around the globe that have promoted peace and social justice. We can also, perhaps, inspire them to become future peacemakers who will use their language skills to help achieve a world free of war, poverty, prejudice, and pollution.

Kip Cates is professor emeritus at Tottori University in Japan. He is active in the fields of global education, peace education, and language teaching as a writer, speaker, and teacher trainer. He is a founder of TESOL’s Social Responsibility Interest Section, a guest lecturer on the Japanese NGO Peace Boat, and past chair of JALT’s Global Issues Special Interest Group as well as editor of its quarterly Global Issues in Language Education Newsletter.

The 17th Nobel Summit was organized in Mexico, September 19-22, with the theme of “Make your mark for peace.” This year some 1200 students and teachers participated, half of them from Mexico. [continue reading…]

The Global Campaign for Peace Education (GCPE) has been nominated for the 2021 Nobel Peace Prize.  The nomination recognizes the campaign as the world’s most dynamic, influential, and far-reaching project in peace education, the sine qua non for disarmament and the abolition of war.  [continue reading…]

Former USSR President and Nobel Prize Peace winner Mikhail Gorbachev urged other winners to push for nuclear disarmament and demilitarization. He noted that all winners were united by the desire to spread the ideas of peace and a culture of peace among the citizens and especially among young people. [continue reading…]