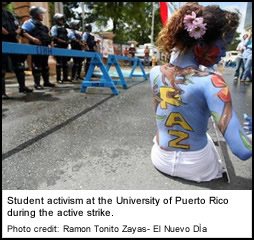 As peace educators we seek to develop understanding of the interconnections between peace, democracy, human rights, and nonviolent action. This is the main quest we pursue in every educational endeavor we engage in. We also assume the emancipatory Freirean principle of the interrelationships between reflection, action, and transformation as inherent to our educational practice. In our peace education courses, we have learned from our students’ action proposals and creative projects about commitment, critical inquiry, and the praxis for peace and justice in an unjust and violent world.

Over the past six weeks, however, thousands of students in strike from the University of Puerto Rico, have taught us intensively many lessons on peace, democracy, human rights and nonviolence that have deeply moved our thoughts and hearts. It is these lessons we wish to reflect upon and share so that they enrich our pedagogical action for peace. Beforehand, it is essential to acknowledge that the student movement at the University of Puerto Rico has a trajectory of over sixty years of nonviolent militant actions against war and for demilitarization, in defense of affordable public higher education, University reform and autonomy. Thus, several student generations have historically paved the way towards justice and democracy within our university.

On April 22, 2010, the students of the University of Puerto Rico in Río Piedras started a 48-hour strike, taking over the university’s main campus in protest over administrative measures that undermined their access to higher education. By May 29, 2010, this student action had grown into an indefinite strike involving the eleven campuses of the University, with an elected negotiating committee and evolving proposals for guaranteeing students’ rights to a public and accessible education. Representative of the future they aspire to is the slogan on a banner students hung from the main gate that reads “A country without education, is a country of slaves.” The expression “if you don’t let us dream, we will not let you sleep,” drawn originally on a bench in the University central square, now hangs on a placard in the front gate of our campus as a distinctive signal of the students’ paradigmatic ethos.

Dialogue, transparency, and participation, have been the students’ emblematic flags in this conflict that has taught us how to attain unity within diversity and peacefully exercise participative democracy in the struggle for a just cause. Their distinctive pennants and chants capture their principles of unity and claims for transformation and hope. This student movement that embraces all the campuses, under the rallying cry “¡Eleven campuses, one University!” is ideologically diverse and creatively distinct. It is a movement rich in nonviolent actions of protest, persuasion, and intervention, such as public declarations, assemblies of support, mass communications, sit-ins, dialogic teach-ins, vigils, ecumenical liturgies, marches, parades, display of symbols, rejection of institutional authority, social disobedience, and campus occupation. Students have privileged as nonviolent weapons the potentialities of drama, music, symbolic expressions and artistic performances. They have also created alternative news media, such as “Radio Huelga,” and reached wider audiences through a variety of blogs and digital social networks. Law students have assertively vindicated their human and civil rights in court. Many ways have taken form to set forth their just claims, engage in debate and negotiation, generate informed public opinion, and achieve both national and international solidarity.

The right to public education has been a key dimension in this process. The catchphrase “education is a right, not a privilege” has been at the center of the dispute over what kind of a university they defend for themselves and for future generations. The right to an accessible, high quality education is at the core of this conflict, since as they express, “this struggle is a necessary condition for peace."

"We are students not criminals,” has been a battle cry repeated over and over from inside the Río Piedras campus, when after the first day of the strike the University was militarized and surrounded by heavily armed Police Special Forces. As government and university officials have attempted to continuously criminalize the student movement, this chant has echoed through. Being students is their unifying cry, yet this movement is diverse and different in many ways, summing up a plurality of voices, identities, and strategies in the unified resistance and collective action undertaken towards a common goal. 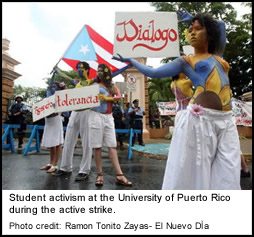 One element that has distinctively characterized this struggle has been the participatory democratic processes and horizontal deliberative spaces the students have tested and engaged in for conflict resolution and decision making. Various student assemblies have ratified this strike and elected a Negotiating Committee to represent them in various forums. Their spokespersons have exercised a participatory leadership, thus giving a unisonous, clear and credible voice to the concerted opinions and decisions of the grassroots movement, in sharp contrast with the imprecise, worn-out and occasionally bellicose discourse of University and government officials. Also important has been their organization within the campuses to allow for their survival, peaceful coexistence, and well being in a caring and cared for environment, which has even included the planting of trees and cultivation of vegetable gardens.

As peace educators, the guiding principles and actions of our student body in favor of a quality public higher education summons us. Moreover, their exemplary defense of a democratic university as a social investment for the common good, in contrast with an administration and government that insists in measuring its value in terms of costs and funds, enlightens us. Their conciliatory discourse, nonviolent resistance and unlimited creativity in the midst of the repressive State force they resist and the institutionalized violence they denounce, teaches us how to day-by-day give life to our rights as citizens, thus making participatory democracy a reality that surpasses by far conventional representative democracy. Moreover, the ethics of solidarity they embody educates us for a culture of peace and human rights and gives testimony to the truth of the Gandhian principle that affirms nonviolence as “the weapon of the strong."

Suggested links for more information on the University of Puerto Rico strike:

Suggestions for solidarity actions:
Please consider writing to the President, Chancellor and Board of governors insisting they settle their differences with students by nonviolent means, seriously considering the proposals set forth by the students in defense of public education.