Sowing the seeds and planting Moringa trees for peace education awareness over an 18 month period in 56 countries of Africa including the surrounding Islands.

On October 15 2021 Mariana Price from Grow for Health, South Africa launched the second leg of a global campaign to plant Moringa trees and promote awareness of peace education.  The recently launched SHINE AFRICA Campaign will also teach about other issues of peace, conflict and justice those on the continent are facing.

The Moringa tree will be used as the basis of an educational campaign focused on peace education, health and healing, fighting malnutrition, food security, plant growth, fixing soils, restoring water quality, carbon issues, and the promotion of Moringa products for health and wealth.

Mariana Price sees Africa as the food hub of the future – with much hope and promise. This continental effort also includes plans for supporting the development of  Peace Education Centres in each Country, or as many as possible.

Background: On July 12, 2021, the Centre for Peace Education Manipur (CFPEM) (India) launched a campaign to plant more than 10,000 moringa trees in South East Asia. Leban Serto, convenor, dedicated the effort to the Global Campaign for Peace Education (GCPE). Leban was a participant in the 1999 Hague Appeal for Peace Conference where the GCPE was launched. At the launch, Leban Serto observed that the World continues to face multiple threats, including climate change – and peace education is needed now more than ever as environmental sustainability and peace are intimately related. He also noted that actively engaging with local communities and encouraging the growing of Moringa trees is one simple way to address issues of conflict in South East Asia as well as for the rest of the world. Leban Serto has also developed lessons on peace and nonviolence that incorporate the Moringa tree.

Actively engaging with local communities and encouraging the growing of Moringa trees is one simple way to address issues of conflict in South East Asia as well as for the rest of the world.

Dr. Serto worked with Mariana Price from South Africa as a Team Advisor in SE Asia. She is now the convenor for the SHINE AFRICA Campaign and the Global Online Moderator for Africa Moringa Hub. She is also a Networking Consultant and Presenter on the virtual networking today platform for Africa.

Team Advisors from each of the 56 countries of Africa will be appointed to support the effort. The Campaign is also supported by a team of experts including scientists with special knowledge of the Moringa tree. The initiative is supported by Tony Jenkins, Coordinator of the GCPE; Dr Leban Serto, CFPEM India; Joshua Haruna; Nettie Bee; Africa Moringa Hub; Romany Thresher; and virtualnetworking.today.

For more information and to get involved:
Mariana Price – Campaign Convenor. +27829600270
marianagrowforhealth@gmail.com 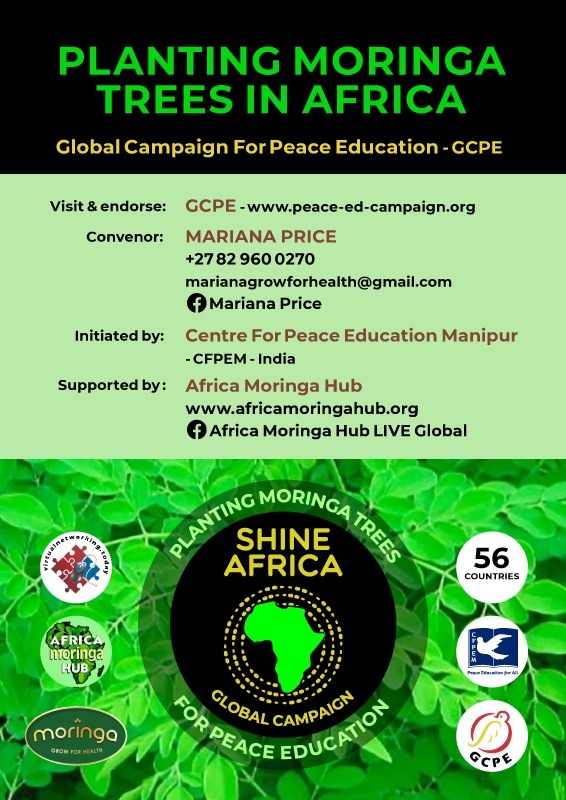