Rethinking General and Complete Disarmament in the Twenty-first Century 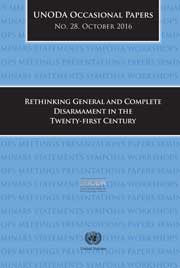 Overview
This publication’s authors, who include some of the world’s leading scholars, diplomats and activists on the topic, examine historic, strategic, humanitarian and economic aspects of general and complete disarmament to elaborate and elevate the case for prohibiting conventional weapons systems as well as nuclear weapons. The featured articles were originally presented at the seminar held at the United Nations Headquarters in New York on 21 October 2015 entitled “Comprehensive Approaches for Disarmament in the Twenty-first Century: Rethinking General and Complete Disarmament”. It was organized by the Centre for International Studies and Diplomacy at at the School of Oriental and African Studies, University of London, and sponsored by the Permanent Mission of Costa Rica.

The days of endless searching for resources that explore the nexus between gender and disarmament are finally over. Reaching Critical Will (RCW), the disarmament programme of the Women’s International League for Peace and Freedom, has launched the very first Gender and Disarmament Database. [continue reading…]

Arigatou International Geneva is carrying out a series of three online dialogues to contribute to peacebuilding, resilience and the prevention of violent extremism through education in Africa. [continue reading…]