This Thursday, July 9, is the 65th anniversary of the Russell-Einstein Manifesto, a ground-breaking event that gave rise to the establishment of the Pugwash Conferences on Science and World Affairs in 1957 (awarded the Nobel Peace Prize in 1995) and the World Academy of Arts and Science in 1960.

This week also sees two other significant, nuclear disarmament related anniversaries: July 8 is the date in 1996 when the International Court of Justice delivered its historic judgement on the illegality of the threat or use of nuclear weapons. And July 10 is the anniversary of the state-sponsored terrorist bombing of the Greenpeace ship the Rainbow Warrior in New Zealand to prevent it from protesting against the French nuclear tests at Moruroa. The ensuing dispute between France and New Zealand was eventually settled through a mediated ruling by the UN.

These three anniversaries provide inspiration to consider the roles of science, law and diplomacy to achieve peace, security and nuclear disarmament. 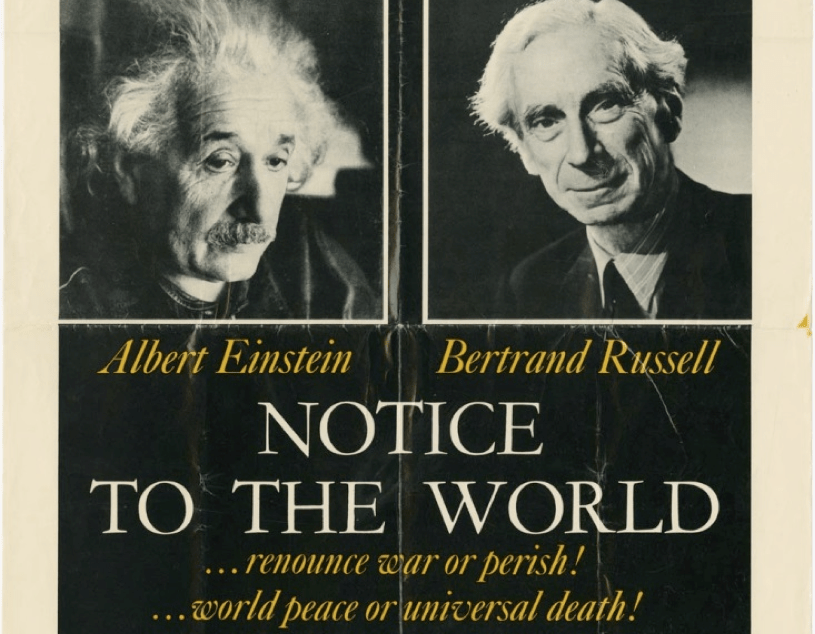 In May 1946, Albert Einstein sent a telegram appeal to several hundred prominent Americans calling for establishment of an organisation “to let the people know that a new type of thinking is essential” in the atomic age. Einstein wrote in his telegram: “The unleashed power of the atom has changed everything save our modes of thinking and we thus drift toward unparalleled catastrophe.”

In Einstein’s view, “old thinking” included the belief that wars are inevitable; that the best defense is a good offense; that any military build-up by an enemy must be matched or exceeded; and that wars can—indeed, must—be fought against hateful and dangerous concepts such as terrorism and communism. The new thinking was that global governance, conflict resolution and common security must replace preparations for war.

This thinking was outlined more comprehensively in the Russell-Einstein Manifesto which opens with the question:

‘Here, then, is the problem which we present to you, stark and dreadful and inescapable: Shall we put an end to the human race; or shall mankind renounce war?’ The answer was of course that we must put an end to war. ‘We have to learn to think in a new way. We have to learn to ask ourselves, not what steps can be taken to give military victory to whatever group we prefer, for there no longer are such steps; the question we have to ask ourselves is: what steps can be taken to prevent a military contest of which the issue must be disastrous to all parties?‘

The Manifesto calls for an ‘agreement to renounce nuclear weapons as part of a general reduction of armaments’ but notes that this would not afford an ultimate solution. ‘Whatever agreements not to use H-bombs had been reached in time of peace, they would no longer be considered binding in time of war, and both sides would set to work to manufacture H-bombs as soon as war broke out, for, if one side manufactured the bombs and the other did not, the side that manufactured them would inevitably be victorious.’ As such, the Manifesto re-affirms a number of times that nations must give up the option of war itself and to use ‘peaceful means for the settlement of all matters of dispute between them.‘

An interesting point is that these were scientists – not politicians – who came together to call for and end to nuclear weapons and war. They appealed in particular for all of us – whether world leaders or regular citizens – to look beyond our national identity in order to recognise our common humanity. ‘We want you, if you can, to consider yourselves as members of a biological species which has had a remarkable history, and whose disappearance none of us can desire… We appeal as human beings to human beings: Remember your humanity, and forget the rest. If you can do so, the way lies open to a new Paradise; if you cannot, there lies before you the risk of universal death.’

On July 8, 1996, the International Court of Justice rendered its decision on a question asked by the UN General Assembly on the legal status of nuclear weapons.

The ICJ affirmed (by split vote) that the ‘threat or use of nuclear weapons would generally be contrary to the rules of international law applicable in armed conflict, and in particular the principles and rules of humanitarian law;’ and (unanimously) that ‘There exists an obligation to pursue in good faith and bring to a conclusion negotiations leading to nuclear disarmament in all its aspects under strict and effective international control.’

The Court conceded that there might possibly be a legal use of nuclear weapons if the very survival of a state was at stake and a nuclear weapon could be used in that circumstance that did not breach IHL (i.e. against a military target far from civilian centres with minimal radioactive fallout), but even then the Court indicated that it had no evidence to demonstrate that such as use was possible. Rather, the court noted that ‘The destructive power of nuclear weapons cannot be contained in either space or time.’ In essence that ICJ opinion has rendered all uses of nuclear weapons illegal, unless a state can prove that there is a use that could confirm to international law.

The significance of the ICJ decision is that it affirms customary international law which applies to all states, as compared to treaties which generally only apply to States parties to those treaties. This means the obligation to achieve nuclear disarmament affirmed by the ICJ is applicable not only to States parties to the Non-Proliferation Treaty, but also to those that are not parties, i.e. India, Israel, North Korea and Pakistan. It also means that the general prohibition against the threat or use of nuclear weapons applies to all States, including those that are not bound by the Treaty on the Prohibition of Nuclear Weapons, i.e. all the nuclear armed and allied states.

The ICJ prohibition on threat or use of nuclear weapons was strengthened further by the UN Human Rights Committee in 2018, when they affirmed in General Comment 36 on the Right to Life that ‘The threat or use of weapons of mass destruction, in particular nuclear weapons, which are indiscriminate in effect and are of a nature to cause destruction of human life on a catastrophic scale is incompatible with respect for the right to life and may amount to a crime under international law.’ Although such a decision by the UN Human Rights Committee is not as authoritative under international law as a decision from the International Court of Justice, it adds legal and political weight due to the fact that all the nuclear armed States with the exception of China are parties to the International Covenant on Social and Political Rights, which includes the Right to Life about which General Comment 36 was made (China has signed but not ratified the covenant).

The resolution of the dispute between France and New Zealand arising over the Rainbow Warrior bombing demonstrates the value and utility of the UN and its mechanisms under Article 36 for the resolution of international conflicts, including those relating to nuclear weapons and acts of aggression.

On July 10, 1985, the Rainbow Warrior, a peace boat operated by Greenpeace, was destroyed by limpet mines secretly attached to the hull of the ship below water by French divers from Direction générale de la sécurité extérieure (DGSE – the French secret service) while the boat was moored in Auckland harbour (New Zealand). The French government destroyed the boat to prevent it from sailing to Moruroa (Polynesia) where it was planning peaceful protest against French nuclear tests.

One person was killed in the explosion. New Zealand caught two of the DGSE agents involved in the killing who were then tried and convicted of manslaughter. To add insult to injury, France responded to the conviction of their agents by initiating an economic boycott on New Zealand.

Where-as the United States was responding around the same time to state sponsored terrorism of Libya by bombing Tripoli, New Zealand chose a diplomatic path, proposing mediation by the UN Secretary-General to resolve the international dispute. This approach was agreed to by France. On July 6, 1986, the UN Secretary-General presented his ruling on the case which was implemented by both parties to the dispute.

Following the resolution, New Zealand as a sign of good-will, established a New Zealand-France Friendship Fund to help restore good relations between the citizens of the two countries, which had been soured in particular by the French actions. The fund supports arts and cultural exchanges between France and New Zealand.

This was not the first time that New Zealand has utilised United Nations mechanisms for security and conflict resolution. In 1973, New Zealand, Australia and Fiji launched cases in the International Court of Justice against France over it’s atmospheric nuclear testing program which was releasing dangerous radionuclides in the Pacific. The cases were instrumental in moving France to end its atmospheric testing in 1975. A similar ICJ case submited to the ICJ by New Zeaand in 1995 helped end France underground testing and move France to close down its nuclear test sites in the Pacific.

The success in using UN mechanisms by New Zealand for key disputes and issues relating to its security, was one of the factors that led New Zealand to reject the illusory security of nuclear deterrence, to which it had subscribed to under extended nuclear deterrence relationship with the US, and adopt instead the most comprehensive nuclear abolition legislation in the world in 1987.

The ideas in the Russell-Einstein Manifesto, and the examples of the ICJ nuclear weapons case and Rainbow Warrior dispute, reflect key aspects of the UN Charter including Article 2 on the prohibition of the threat or use of force in international relations and Article 33 on processes and mechanisms for the peaceful resolution of conflicts.

These demonstrate that security can be achieved, and international conflicts resolved, without recourse to nuclear deterrence or to the threat or use of force.

As the UN commemorates its 75th anniversary this year, civil society organisations around the world are calling for reaffirmation and better implementation of these articles – and especially for all UN members to subscribe to the compulsory jurisdiction of the International Court of Justice to resolve international disputes, especially when diplomacy has not succeeded. So far  74 countries have subscribed to such ICJ jurisdiction.

Alyn Ware is International Representative for Aotearoa Lawyers for Peace and a Consultant for the International Association of Lawyers Against Nuclear Arms. He served as Executive Director of the Lawyers’ Committee on Nuclear Policy from 1992-1999, coordinating the World Court Project campaign on the ICJ Advisory Opinion on legal status of nuclear weapons, and was a volunteer for Greenpeace New Zealand in 1985, including leading public tours of the Rainbow Warrior when it was moored in Auckland Harbour.

No Going Back: What Could the Resumption of Nuclear Testing Mean for A New Normality?

Any and all progress made toward controlling the proliferation of nuclear weapons, as well as their elimination, are placed in jeopardy by the possibility of the resumption of nuclear testing. Peace educators must give serious and immediate attention to this Statement from Abolition 2000 if we are to achieve the renewed normality that we have begun to contemplate.
[continue reading…]

What would the verdict be if President Truman were put on trial for the atomic-bombing of Hiroshima and Nagasaki? How would you act if you were a world leader during a nuclear weapons crisis? CND Peace Education engages thousands of school students across England via award-winning resources and support to empower young people with knowledge on peace and nuclear issues. [continue reading…]

Reducing the risk of nuclear war begins in the classroom

“There has never been a greater need for education in the areas of disarmament and non-proliferation… Since the end of the Cold War, changing concepts of security and threat have demanded new thinking. Such new thinking will arise from those who are educated and trained today.” – Former UN Secretary General Kofi Annan [continue reading…]