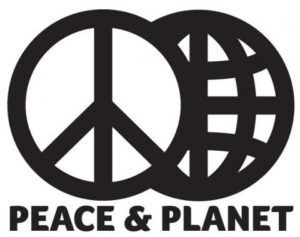 2015 Peace & Planet Mobilization for a Nuclear-Free, Peaceful, Just, and Sustainable World is comprised of representatives of dozens of leading organizations in the United States, Europe, Asia, and the Middle East.

Last month the Bulletin of the Atomic Scientists announced that as a consequence of the nuclear, climate change and other existenial threats to humanity, their Doomsday Clock must remain set a three minutes to midnight, the “closest to catastrophe since the early days of above-ground hydrogen bomb testing.”

The Peace & Planet Network has adopted the following statement of appreciation and response to the BAS announcement, which urges us to more deeply understand and respond to the systemic roots of these threats to human survival and to more deeply integrate our movements to challenge them. We urge you to read and circulate our statement (see below.)

Peace and Planet welcomes the stark warning provided by the Doomsday Clock hands being held at 3 Minutes to Midnight, but calls for bold and integrated actions to reverse the urgent existential threats of nuclear war and change. Measures to abolish nuclear weapons and to move to a carbon zero economy must be accompanied by a shift from the competitive, dominance and violence-based political and economic systems that violate human rights and have caused these and other threats to civilization. Campaigners on peace, human rights and environmental issues can be more effective by recognizing the links between these issues and acting together.

Last week, the Bulletin of Atomic Scientists made its annual announcement regarding the Doomsday Clock, the magazine’s annual assessment of the gravity of the most pressing threats facing humanity.[i]The Bulletin’s panel of scientists and policy experts left the Clock’s time unchanged—but still perilously close to catastrophe at three minutes to midnight. The Bulletin panelists sounded the alarm due mainly to the dangers posed by “humanity’s two most pressing existential threats, nuclear weapons and climate change.” They did not advance the hands further towards midnight because they saw some signs of progress on the part of governments in the multilateral agreement reached this year to limit and monitor Iran’s nuclear technology program and in the Paris accord setting targets to limit climate change.

According to the Bulletin panel, however, these two successes for diplomacy “constitute only small bright spots in a darker world situation full of potential for catastrophe.” Their message recites a litany of disturbing developments that reflect a world in which there are some successes on the margins, but in which intractable obstacles remain to a global society sufficiently at peace and in balance with the ecological rhythms of the planet to assure humanity’s future.  The nuclear arsenals of Russia and the United States remain large enough to destroy global civilization in a day.  All of the countries with significant nuclear arsenals—China, France, India, Israel, Pakistan, Russia, the United Kingdom and the United States—are modernizing their nuclear weapons.  The Bulletin’s Nuclear Notebook reported in 2014 that “[n]ew or improved nuclear weapon programs underway worldwide include at least 27 ballistic missiles, nine cruise missiles, eight naval vessels, five bombers, eight warheads, and eight weapons factories.”[ii]  North Korea appears well on its way to possessing a deployable nuclear arsenal. This new round of nuclear arms racing is occurring in a time when there are no new arms control negotiations on the horizon, and when, as the Doomsday Clock panel noted, there are intensifying confrontations involving nuclear-armed states from Ukraine to Syria to the South China Sea.

The Bulletin panel found the Paris climate agreement to fall far short of what is needed to prevent global warming from reaching levels that will wreak havoc on ecosystems and their inhabitants. Although the Paris accord’s signatories set bold goals, their actual commitments and policies for reducing greenhouse gas emissions come nowhere near to meeting them. The Bulletin noted that while some countries are expecting nuclear power to provide an alternative energy source with less greenhouse gas emissions, problems that long have plagued the technology remain unsolved, including high costs, lack of long-term waste storage solutions, and the intrinsic relationship of nuclear power technologies to the capability to make nuclear weapons. The panel also warned that technologies such as biotech and artificial intelligence are emerging with insufficient systematic planning and regulation, potentially posing “global scale risk,” particularly if developed for military purposes.

The Bulletin’s Doomsday Clock message portrays a global society in which the dynamics driving nuclear arms racing, great power confrontations, and global warming remain largely untouched by policies and negotiations that treat each threat to our future in isolation. And it is here that we must go beyond the Bulletin’s analysis and prescriptions. It is not enough to call on our governments to address the most dangerous and immediate symptoms of our predicament. We must look more deeply, to their inter-related causes and effects.

A civilization in which endless competition is the motor for development is approaching its limits. The quest for advantage within economies has generated immense disparities of wealth, and with it endless conflict. The project of control of the many by the few—an inescapable characteristic of a society that generates stark inequality both within and among states—has brought with it endless efforts to perfect state violence. The quest for advantage among states has created weapons that can destroy all states. Heedless extraction of natural resources in the service of endless wealth, and the endless state power that sustains it, threatens to destroy the ecosystems all else depends on.

In August of 1967—almost half a century ago—Martin Luther King said,

King understood that slavery was not an aberration, but an expression of a social system that in key ways has come down to us un-transformed.  He was telling us that one of its fundamental characteristics—the treating of human beings as objects, as things to be exploited and profited from—was deeply rooted, and is with us still. Intrinsic to this process is the promulgation of racisms and nationalisms that reinforce power and privilege by denying our common humanity and by providing those who rule with time-tested strategies to divide and distract us.  Equally important is the same system’s reduction of the natural world to an array of things to be manipulated and controlled, seen as nothing more than sources of resource inputs and profit.

If we are to understand and change the world we inhabit, we must understand and make the connections between nuclear weapons and climate change on this level. And if we are to build movements deep and broad enough to make our voices heard, we must connect the causes of the threats we face from our out of control technologies to the everyday violence of starkly inequitable societies, held in place by the a spectrum of violence that stretches from militarized police to the missile silo.  At the same time, we must work to develop a positive vision of an economy that serves the people and in which we can work to heal and restore the planet, a vision in which the planet and its people can no longer be reduced to mere inputs to fuel and serve the economy.

Peace and Planet seeks to address these inter-related crises in an integrated way, building collaborations between organizations and movements. Beginning with our mobilization on the eve of the Nuclear Non-Proliferation Treaty Review Conference, our education and organizing efforts have sought to make the connections between issues, engaging our national constituencies and the broader community with more effective actions than if we focused solely on single issues initiatives and the current agendas of governments. Through integrated analysis and action we deepen our understanding and enhance our collective power. We understand and appreciate that we are not alone in our struggles for human survival —as individuals, as organizations, and movements.

For Peace and Planet

What would the verdict be if President Truman were put on trial for the atomic-bombing of Hiroshima and Nagasaki? How would you act if you were a world leader during a nuclear weapons crisis? CND Peace Education engages thousands of school students across England via award-winning resources and support to empower young people with knowledge on peace and nuclear issues. [continue reading…]

The Treaty on the Prohibition of Nuclear Weapons, which was adopted today in Conference Room 1 at the United Nations by an overwhelming 122-1 vote, makes a compelling case for the stigmatization and elimination of nuclear weapons. [continue reading…]

“The Beginning of Our End”: On 75th Anniversary, Hiroshima Survivor Warns Against Nuclear Weapons

On the 75th anniversary of the atomic bombing of Hiroshima, Democracy Now! spoke with Hideko Tamura Snider, who was 10 years old when she survived the attack. Hideko is the founder of One Sunny Day Initiatives, a peace education organization that educates about the consequences of the use of nuclear weapons.
[continue reading…]