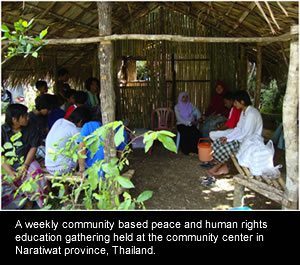 One of the key inspirations for many peace activists and peace educators to sustain their commitment for peace is the belief that the seed of peace is inherent in every human being. Based on this conviction, each of us is capable of nurturing this seed and can overrule and transform the seed of violence within us into a powerful force for positive change through non-violence. This is how weapons are dismantled in the mind of men and replaced with constructive and non-violent alternatives.  In fact, the concept of the seed of peace can be found in every faith and spiritual tradition which provides guidance to discover, explore, nurture and translate the power of peace into action and reality. Hence, these religious and spiritual resources are the primary form of peace education in our societies.

Peace education in Thailand is comparatively new when compared with other countries in Asia; most of which have experienced massive destruction of lives, property and infrastructure as a result of warfare and violent conflicts. Thailand with its record of having the highest number of  military coup d’état in the world,  began to see peace education conducted in an informal  way by civil society groups  comprised of students, civilians and human rights activists during the major people uprising against dictatorial rule in 1973, 1976 and 1992. The religious and spiritual concepts such as Ahimsa and Satyagraha of Gandhi were the key principles of these movements. Despite its victory of overthrowing military regimes, peace education and its contributions have not enjoyed much recognition, popularity and/or mainstreaming. It has drawn government and public attention only in recent years following the eruption of violence in Thailand’s Southern Frontier Provinces in 2004.  A conventional heavy handed approach of the Thai government in response to a Malay Muslim nationalist movement for self determination has not improved the situation, but further intensified conflict and escalated the violence. The bitterness of violence is used by both state and non-state actors to justify violent retaliations. Young men and children are the primary targets of indoctrination and armed recruitment by both sides. It is, therefore, always a challenge to promote peace education in such a fragile situation where communities are polarized and overwhelmed with hatred. 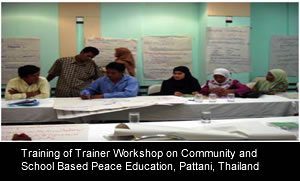 Asian Resource Foundation and Asian Muslim Action Network (ARF/AMAN) started peace education programs in Southern Thailand in 2004. They began by engaging the direct victims of violence such as widows, orphans and violence affected youth in the integrated peace building and trauma healing process, with an overall aim of empowering the victims of violence to be free from past burdens, to be able to discern the complexity of conflict and transform themselves into peace builders. To achieve these objectives, it was imperative to establish the right understanding of conflict and its nature; that conflict is not synonymous with violence and can lead to opportunities and positive change if it is dealt with the right attitude and proper means. Although the root cause of conflict in Southern Thailand is not religion, it has been used as a dividing factor between Buddhists and Muslims. As a result, belief takes precedence over the truth which led to prejudice and hatred and subsequently the polarization and collapse of communities. The concepts of overt, structural and cultural violence helped them to realize how they all are the victims and the perpetrators of violence. One of the key elements of peace education is an inter-faith dialogue, which equips beneficiaries with deep listening skills that are required for empathy and the courage to be understood. These skills enable them to discover their hidden prejudices by taking risks in order to deal with difficult and sensitive questions regarding religion, identity and violence. Sharing experiences of losing their loved ones is not only part of trauma healing but it allowed participants to go beyond an image of the enemy and develop empathy to help nurture healthy relationships which serves as a strong foundation for sustainable peace work. Community development programs are another way to foster and reconcile relationships. Participants from both faiths were facilitated to identify and analyze community problems and to collectively seek outlets based on the mobilization of resources available in their communities. The process helped them break the barriers and realize that despite the fact they have differences they share the common experience of being victims of an unjust structure and aspire to the common goals of justice and peace.

Human rights violations and violent conflicts are inseparable. Widespread human rights violations are the best fuel to convert an innocent person into a terrorist. It is an unfortunate reality that so far the justice system has been unable to bring state perpetrators of violence to justice and many innocent Malay Muslim civilians have become scapegoats and imprisoned without due judicial procedures. As a result, local Malay Muslim populations have lost their faith in both the justice system and the government. Prisons have become a hotbed of terrorism and violence is believed to be the only means to achieve justice and peace. Peace education in prisons and detainment centers was introduced to reach out to detainees. They were equipped with different alternatives to express their grievances and attain justice through non-violent and democratic means. 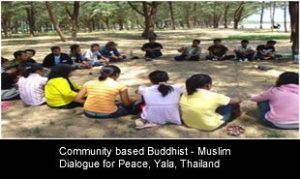 Community based human rights protection and peace building mechanisms are also components of peace education used to build awareness among people regarding their rights, and to furnish them with legal knowledge in which to protect, defend and promote their human rights. At the conclusion of the program, each community was encouraged to form a community-based organization. A network among targeted communities was established to create bottom-up socio-political space to consolidate, push-forward and achieve their demands through democratic means. It is hoped that the success of this process would contribute towards the attainment of power devolution and self-determination of people, as well as the withdrawal of military and a diminishing of militancy and armed insurgency.

In mainstreaming peace education, ARF/AMAN has assisted local government to develop peace education curriculum. Peace clubs were established in various schools in the Southern Frontier Provinces of Thailand with students serving as a bridge among civilians. They organize community outreach programs in order to spread the message of peace and non-violence.

The situation remains complex and violence is still on the rise. It is difficult to predict when peace will be achieved. A culture of peace takes time to cultivate but the seed of peace that exists in every human being is a social capital that can be nurtured through continuous efforts of peace education. Peace may not prevail in the present generation but if relationships can be positively transformed between people in conflict through peace education, then the next generation can use this as a foundation to continue weaving our efforts for peace. This is how the spirit of peace is sustained.

Ekraj Sabur is a peace activist. He received his MA in Peace, Conflict and Development Studies from the UNESCO Chair of Philosophy for Peace, Universitat Jaume I, Spain after taking his Bachelor of Social Science in Asia Pacific Studies from Ritsumeikan Asia Pacific University in Japan.  He has been engaged in the development works and peace building efforts through capacity building and grassroots outreach programs in Asia and the Middle East for the past decade. He is currently serving as a director of the Bangkok based International Institute of Peace Studies c/o Asian Resource Foundation and Asian Muslim Actions Network.

Gambia: ‘It Is Not Enough to Teach Children to Read and Write’

The Executive Director of Basic and Secondary Education of Gambia, Amie Coleh-Mbye, said the current education policy commits the government to upholding the right of every person to basic education, regardless of gender, age, religion or disability. “This however cannot be attended without including the culture of peace among students,” she said. “When student harness a culture of peace, they will be better able to tolerate regardless of their circumstance.” [continue reading…]

Promoting Culture of Peace Through Dialogue