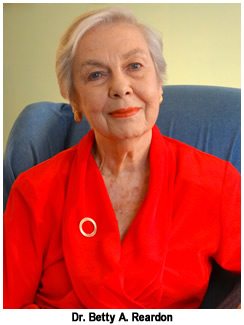 The following is excerpted from a longer interview carried out in collaboration with the Ikeda Center for Peace, Learning, and Dialogue in Cambridge, Massachusetts, and was published in the July 2015 issue of the SGI Quarterly magazine.

SGI Quarterly: What are your thoughts on human dignity and the relationship between dignity and human rights?

Betty Reardon: Human dignity is intrinsically part of all human beings, but it has to be realized, and to be realized, it has to be actualized. What I mean by that is we must come to the awareness, the realization that as human beings we are endowed with dignity, which at its essence means that we are worthy of life, we are worthy of respect and we are responsible to give respect and affirm life, so that it might be actualized.

Unless there is this process of reflection and action, dignity doesn’t truly exist in our experienced world. I would argue that many people are denied dignity, convinced by their experience and argumentation made by those who see themselves advantaged by some not having their full dignity. I see that there is a component of the peace process that should be related to the realization of human dignity. That is, when we say we are about building or making or negotiating peace, we should be about building, making and negotiating the realization and actualization of human dignity.

The genius of the Universal Declaration of Human Rights is that the drafters, although they didn’t put it in those terms, had that intuition. They were thinking politically, legally in terms of the specific assaults on human dignity that occurred before and during World War II, so that in many ways, the document says: “If we do this, this and this, we won’t have World War II again.” This gives us a very good idea, when we say we are building, negotiating peace, of just what that would be.

A Problem of Design

This also means that human rights are intrinsic to peace, and the Declaration recognizes the fact that “the foundation of peace in the world” is human dignity. But where we need more–in terms of recognizing the interrelationship between human rights and peace, and working for the actualization of human dignity–that work is a political process. I think of peace as essentially something that is made real through political process and peacemaking institutions. We need institutions that will enable us to achieve without violence what we thought we had achieved through violence for most of organized human history.

My notion of the major political obstacle to peace was the lack of international institutions which had compulsory jurisdiction for conflict settlement, methods to keep the peace and to assure citizens’ rights. I think about it as essentially a design problem. We have to design and strategize to bring into being appropriate institutions.

One of the things of the post-World War II period that is a recognition of human rights as essential to peace is the International Criminal Court, but the overall problem is that there isn’t a general system design. We have this one really good institution, and there are others, but how do you fit them together? It comes together as a common system problem when you see that the core of those institutions must always respect human dignity and that they must be in accord with the basic norms of human rights. They’re all of a piece.

But there’s one piece that isn’t there, and that’s the major political problem, the problem of a highly armed international system, which is in fact a kind of international anarchy, every nation for itself, each making itself secure by trying to be scarier than the other. Until that is solved, we will not fully have human rights because the major obstacle to human rights, and to what we now think of as human security, is the militarized security system. I don’t think you can think about only one without thinking about the other. They all have to be put together in systemic relationship, one to each and all of the others. This necessity is why peace education takes a holistic approach.

SGIQ: October marks the 15th anniversary of the adoption of UN Security Council Resolution 1325, which recognizes the impact of war on women specifically and affirms their important role in building and restoring peace.

BR: UN Security Council Resolution 1325 on Women, Peace and Security is the most significant international document since the Universal Declaration of Human Rights. If it were fully implemented, it would drastically change the politics of peace and security. The exclusion of women has contributed toward the perpetuation of war.

Civil society organizations, the originators of 1325, are working to bring it into force through education and lobbying for national plans of action that will emphasize women’s participation. The objective is to end the violence women suffer in war by avoiding armed conflict and ending war. Some are also working on people’s plans of action, actions to be taken by citizens as models to show states how to include women fully and equally into security policy-making at all levels.

There will be no end to armed conflict so long as decisions about security are made solely within the mindset of armed force as the ultimate arbiter of national security–security of the state rather than the well-being of the people of the nation, actual human security. Including women and other excluded citizens in security policy-making would be one way to take some steps toward ending that narrow state-centered definition of security and the constant cycle of armed conflict.

SGIQ: You have written on the connections between war and sexism, arguing that both are part of a patriarchal system based on the threat of force. Could you elaborate?

BR: In 1985, I published a book called Sexism and the War System. It occurred to me that the institution of war was organized around what I called in the book “the primal wound,” the separation of male from female in the human person as a social being. I saw the institution of war was something that derived out of human beings believing that other human beings could be harmed and controlled to gain and keep a position of advantage. One of the first instances was that men could harm and control women in the interest of the order of the community.

In peace research, people talked about the war system, which I saw manifest in the role of men to defend and protect the community, especially property and women. In return for that protection, women would carry the load of the daily security of the people, even to doing the agriculture at certain stages–they would provide for the daily needs. But there were strict restrictions on what they were allowed to do, and as the societies became more elaborate, those restrictions became more elaborate and women more vulnerable. The maintenance of armed force to sustain that system required an enemy from whom the vulnerable, the women and resources such as land must be protected.

The socialization into the notion of enemy also manifested in women being seen as the temptress, as the troublemaker and so forth. Then I began to look at things such as the situation in Chile in the 1970s, when the military took over and all the so-called progress of democracy in women’s rights was swept away. That happened over and over again with the rise of 20th-century militarization. But this was in essence a playing out of the central core institution around which societies were built, which was patriarchy, based on the belief that the old wise men were the ones who should run the show.

The fields of women’s studies and feminism have long defined gender as the socially derived roles of men and women, rooted in cultural norms. I started to look at the whole organization of world society, and it seemed that what I could see was one big patriarchy. At each level of what I call the power pyramid, there were men and women, women almost always subservient to men at every level, but women above some men in the lower levels. I began to see that gender is the position that patriarchy assigns persons to in the whole power order. And the way that evolves is by buying into the social differential between men and women in the first place, and from other “isms” besides sexism. I see colonialism, where you have the Western wise men taking on the right to rule the rest of the world, and then racism, which is an invention to rationalize that power. It’s all interrelated in that way and highly gendered.

I am currently working on a gender lens on global violence, in which the manifestation of the gender difference is perpetuated through violence of one form or another–structural violence, physical violence, systemic violence–an elaboration of the basic concept at the center of the argument put forth in Sexism and the War System. I now see gender as an organizing principle of hierarchy maintained by force. This makes the patriarchal problematic more addressable. We can then begin to change the current sexist concepts underlying the specific forms of violence that characterize the patriarchal gendered order of the international system.

The other piece of this is that those who are benefitting from that system seem to believe that they would be threatened by a real democratic order, so they have continued to depend upon not just the threat of force but also the unleashing of actual force, even on their own populations, to maintain that order. Some people will say, “Oh, well, that’s capitalism,” or this, that and the other form of injustice, but it’s all just different versions of patriarchy. I feel it’s very important to see the links between gender and all world problems.

One of the key entry points into overcoming that is not just disarmament, as such, but general and complete disarmament, which has various definitions, but in essence it means we change the whole system so that those arms are no longer necessary because the threat has been removed through values and institutional change. So peace is a design problem, but it’s also a learning problem, especially the education of the elites. The advantaged have to come to understand that their advantage is very fragile and that if they insist on perpetuating it, the consequences are utter disaster for the whole human race. To me, general and complete disarmament isn’t pie in the sky. It’s a concept that we can use as a way to approach the patriarchal problematic. And if the emerging designs for it turn out to be kind of pie in the sky, we just keep working on them until we get something that will be acceptable, just and viable.