With a major education reforms policy, described by some as an education revolution, being presented to President Maithripala Sirisena yesterday, we could also reflect on the principles of the January 30 International School Day of Non-Violence and Peace (DENIP in Catalan).

This observance was launched by the Spanish poet Llorenç Vidal Vidal in Majorca in 1964 as a starting point for schoolchildren to become peaceful and non-violent in what they do or in settling conflicts. 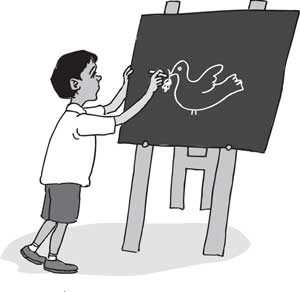 It coincides with the day of the assassination of Mahatma Gandhi, widely regarded as the last century’s greatest apostle of non-violence and peace. Through his Satyagraha policy Mahatma Gandhi toppled, what was considered as one of the world’s most powerful empires and proved to the world that power of non-violence to achieve lasting peace and justice was greater than nuclear weapons.

The day’s essential message is “Universal love, non-violence and peace.” History has shown that universal love is better and more powerful than egoism-a vice, which tragically the newly inaugurated United States President Donald Trump appears to be propagating, with potentially destructive, if not catastrophic, consequences for the rest of the world.

This day’s message also proclaims that non-violence is more powerful than violence, and peace is more powerful than war. Those who promote this way of life believe that above all, we are friends and human beings. Without being classified or separated by name-boards of religion, race, social status or other such self-centred or exclusive factors.

The Spanish movement, DENIP and the World Association of Early Childhood Educators work jointly to celebrate this events in schools.

The United Nations Education, Scientific on Cultural Organisation’s (UNESCO) former Director-General Federico Mayor Zaragoza has been promoting during decades the School Day of Non-violence and Peace, saying “We cannot achieve a sustainable development without a culture of peace”.

This pioneering, non-State, non-governmental, non-official, independent, free and voluntary initiative of non-violent and peace education—is now practised in schools all over the world and in centres of education, teachers and students of all levels and from all countries are invited to take part. It advocates a permanent education in and for harmony, tolerance, solidarity, respect for human rights, non-violence and peace.

The “School Day of Non-Violence and Peace” is a seed, which is planted and cultivated in the hearts of the students. It is a bright, new and positive way of looking at the word and preparing for the future.

In Sri Lanka, with the implementation of the major education reforms where every student will have at least 13 years of education, we hope a regular subject would be introduced to teach children about the culture of peace or the power of non-violence and peace. The children are in school for only about five hours. Therefore the parents also need to be educated on the values and power of the culture of peace, so that they could practise it at home and thereby encourage the children also to do so.

After decades of racial conflicts and a devastating 30-year-war, the national government has committed itself to the principle of inter-religious and inter-racial unity in diversity with a commitment to settle conflicts through peaceful and non-violent means.

We hope with the launching of peace and non-violence classes in schools we will have a solid foundation for lasting peace, social justice and equality.

Dody Wibowo observes that if we want to change the culture of violence in society, forming and strengthening a culture of peace in schools should be one of our efforts to achieve the transformation. [continue reading…]

‘A Piece by Peace: A Sustainable Peace Dialogue’ was co-hosted by Africa Unite (AU) and the International Peace Youth Group on the 23rd February in Cape Town, South Africa. The topic of the forum was: How can we as youth, working with government ensure that we build safe and peaceful communities and create a culture of peace enshrined in the Declaration of Peace and Cessation of War. [continue reading…]

Republic Act No. 10908 mandates the integration of Filipino-Muslim and Indigenous Peoples history, culture and identity in the study of Philippine History in both Basic and Higher Education. The law recognizes the ultimate objective of creating an inclusive history that accounts for all Filipinos. There is however a dearth of resources on Bangsamoro and Lumad history, art, literature, and language. The Mindanao-Sulu History and Peace Education Project seeks to respond to this need. [continue reading…]