The COVID-19 pandemic crisis has shown the world where humanity’s priorities should lie. This major attack on people’s security across the world shames and discredits global military expenditures and prove them an outrageous waste and loss of opportunities. What the world needs now is to focus all means on vital security threats: healthy living conditions for everyone, which necessarily entails more just, green, peaceful societies.

The Global Days of Action on Military Spending (GDAMS) 2020 brings attention to the vast opportunity costs of the current levels of military spending, 1’82 trillion US$ a year, almost $5 billion per day, $239 per person. When a minority of the global population decides to finance war preparations, we all lose the opportunity to fund policies that tackle our real security threats. 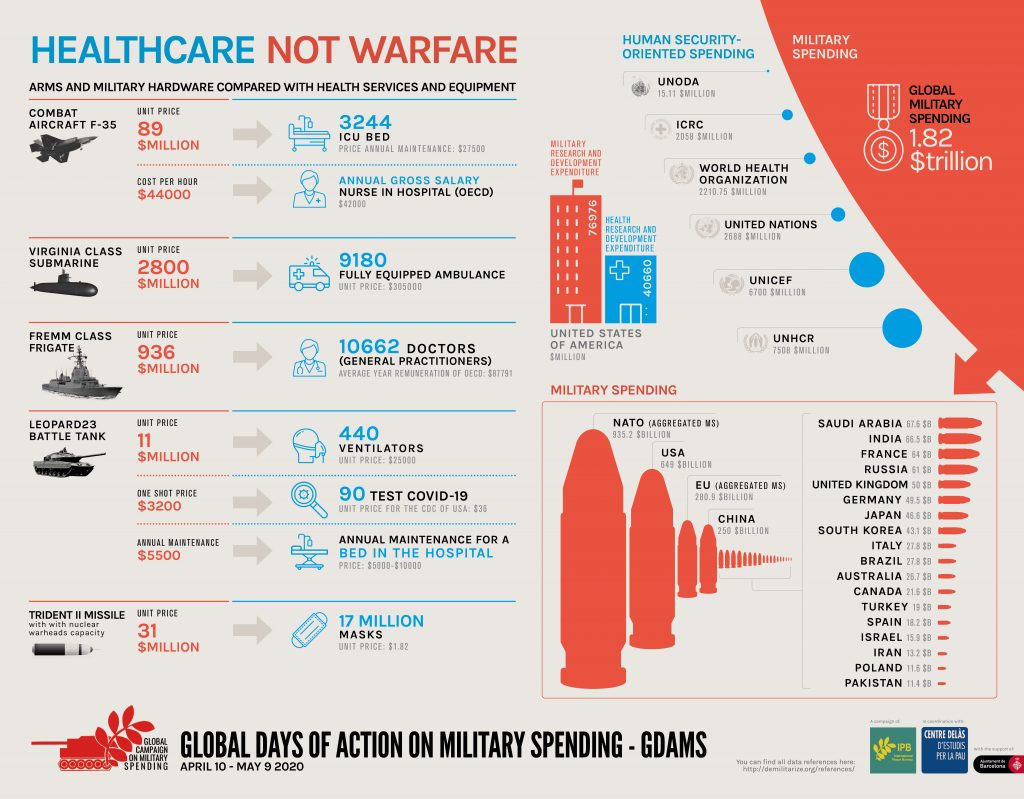 The military could not and will not stop this pandemic

Such a crisis can only be addressed by supporting healthcare and other life-sustaining activities, not with military equipment and personnel prepared for war. The fact that military assets are being deployed during this crisis can be profoundly misleading: it doesn’t justify their bloated budgets, nor does it mean that they are solving this crisis. It shows quite the opposite: we need fewer soldiers, jets, tanks and aircraft carriers and more doctors, ambulances and hospitals. For decades we have been wrong about our priorities, it’s time to (re)consider how military spending has taken a huge amount of public resources to provide a false notion of security that has nothing to do with people’s needs and rights to healthcare, education, and housing, among other essential social services.

It’s time to move the military budget to human needs

Major reductions in military expenditure would free up resources not only to provide universal healthcare, but also to tackle climate and humanitarian emergencies, which also take thousands of lives every year, especially in countries of the Global South, which are suffering the worst consequences of an economic model that has been imposed upon them.

Transferring resources to fund healthcare for all and climate and humanitarian relief would help prevent this from happening again and bail out the most affected communities. These resources could definitively come from the military budget, which has been given preference by decision-makers for decades.

We must ensure that such a major health crisis does not happen again. To do so, we must rethink international politics, reconsider the real threats to our security and provide public civil protection services with the funding they need to properly work. We also have to ensure that this crisis won’t be paid for by the most vulnerable, as has happened many times before. Reallocating defense budgets would help finance a much-needed transition toward more peaceful, just, and sustainable societies and economies.

During GDAMS 2020 (April 10 to May 9), we are rising up together, from Seoul to Toronto and from Sydney to Buenos Aires, to demand major reductions of military spending in order to fund urgent measures to confront the COVID-19 pandemic and to provide human security for everyone.

Take action to move the money from the military to health, join GDAMS 2020!