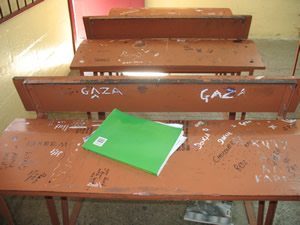 Circa 1498, Columbus took a slightly different route on his third trip to the Caribbean. His more southerly turn brought him close to what is now Venezuela. He sighted an island, with three mountain peaks and the Holy Trinity came to mind. This land, already inhabited by indigenous peoples, was thus renamed La Isla de la Trinidad. Despite the fact that the Spanish officially ceded Trinidad to the British in 1802, the name stuck. Even the capital is called Port of Spain, an ode to history; a contemporary marker of cultural effacements, epistemological hijackings and lingering ‘searches’ for identity.

Sitting upon some hills overlooking the capital, is my birthplace. It is a notorious community called Laventille, and its reputation is one of crime, violence, poverty, rebelliousness and cultural innovation. Growing up poor and living in Laventille is all I knew. I thought the entire country was impoverished. I thought all Trinbagonians had outdoor latrines, and slept crammed onto one bed. I thought all Trinbagonian kids were afraid of the sound of gun shots in the night. I thought all my countrywo/men lived off of their grandmother’s pension. My positionality informed my narrow view of the country; I could not see the whole. It is only when I started attending one of the most prestigious schools in the country, one built in the colonial era, did I begin to grasp a sense that not all Trinbagonians shared my lot. I more deeply grasped this sense, only after leaving the country to study in the United States and travelling around the world. That distance gave me a bird’s eye view and it is then that the dots began to connect. I understood that there were many Hakims across the world, growing up in poor, violence-ridden communities, and that some of the forces that shaped these communities were not all unique to those particular communities. Indeed, some of those forces shared a globalizing element with a long historical legacy: a colonizing ethic, a biopolitical curtailment of human agency. 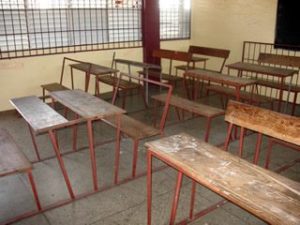 The nation of Trinidad & Tobago (TT) became ‘independent’ in 1962 from England. In its 52 years as a sovereign state, TT has become a non-OECD high income country. Yet, it has a twenty percent (20%) poverty rate. Because of its proximity to South America and its booming manufacturing sector, TT has become a prime transshipment location along the drug trade corridor that runs from the supply base in South America to the burgeoning demand markets in North America. The international proliferation of small arms certainly crisscrosses with this mightily lucrative international drug trade. In TT, the number of gangs has increased and already economically–depressed communities have bore the brunt of an accompanying rise in violence. TT, per capita, has one of the highest homicide rates in the world. Against this backdrop, I study school violence in TT, because, rather unsurprisingly, schools are not immune spaces within a violent society.

I have been conducting a longitudinal, qualitative research study at one secondary school in the capital that is widely known for violence and academic underachievement. What has been affirmed for me from the data are my anecdotal suspicions from my own childhood experiences: that structural violence is concealed from the analytic gaze. My participants- from students to teachers to school administrators to Ministry of Education officials- apprehend violence mostly on the material level. Largely omitted from interrogation are the various forms of structural violence that influence or amplify this direct/material violence. Therefore, the interventions used were narrowly informed by narrow conceptualizations of this material violence; the interventions were aimed at symptoms and not larger influences or ‘causes’. The participants, steeped in the quotidian ebb and flow of life, for the most part, could not see the whole. Barely anyone problematized the dual education system that exists in Trinidad that was inaugurated during the colonial period (i.e. the top academically performing schools were built prior to independence and the students who score the highest on the national exams or whose families have the socio-cultural capital/connections are assigned to these colonial schools). Barely anyone problematized how many schools built in the independence era (to facilitate mass education) struggle with shortfalls in material and human resources. Barely anyone connected the dots between the drug trade, guns in communities, poverty, students witnessing violence, lack of psycho-social support at schools to assist students in processing any trauma, etc. In sum, the whole is hidden from critique. 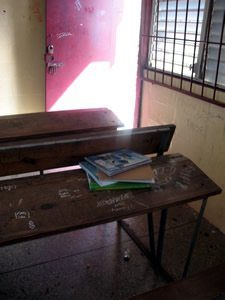 TT is not some brand new postcolonial entity untethered from centuries of colonialism, slavery and indentureship; it is constituted by myriad historical and contemporary influences. History is often butchered and presented as decontextualized parochialisms. Granted that history is not a neat, linear, complete narrative, but its many disjunctures do not mean that there aren’t connective tissues that are perhaps not as readily apparent to the eye. The globalization of 1498 that radically reshaped and named this contemporary space called the Caribbean does share some elements with the globalization of 2015, of the here and now. And one of these connective tissues is what I call a colonizing ethic, a biopolitical curtailment of human agency.

I argue that a critical, global peace education can be a tool among many in helping us to apprehend more of the whole. Dynamical systems theorists who work on conflict and violence usually use visual mapping to demonstrate the complexities, interconnectedness and interdependencies within and across phenomena. A critical, global peace education is not a stationary thing; it must be malleable, proactive and varied. But most of all, it must be both counterhegemonic and generative. It must provide us with the skills and knowledges to resist and critique, but also help us radically re-envision the ground on which we stand and the manner in which we interact with each other and the Earth in very different ways.

A critical, global peace education permits us to see the grand arc of imperialism that divided the world into cores and peripheries and that maintains that disequilibrium today via divisions into camps of developed and developing nations. But it also permits movements and coalitions across the world to link up in solidarity (e.g. Gazans standing with citizens of Ferguson, and vice versa), because they are seeing more of the whole.

This colonizing ethic that biopolitically curtails human agency is about power, control and hegemony. It is seen in the fact that the five countries with veto power on the UN security Council are among the largest producers and distributors of weaponry in the world. It is seen in the fact that nonmilitary forces (e.g. police) are becoming increasingly militarized (see Ferguson, USA in 2014) because the military industrial complex is constantly seeking to expand markets. Increasing income inequalities within societies that are, in the aggregate, seeing economic gains; so much global hunger contrasted with over a billion people beset by obesity; lethargic responses to the global climate crises, in part because of concerns over economic ruination; myopic development over sustainable development; unchecked consumerism; the incorporation of more and more areas into the global economy and their translation into avaricious bottom line considerations: all of these, and more, are connected in part, by this colonizing ethic. Thus my title reference that decolonization ain’t over. We truly need a critical global peace education. Now!

About the Author: Hakim Mohandas Amani Williams, is Assistant Professor of Africana Studies and Education at Gettysburg College, Pennsylvania, USA. He is also a faculty member in the Globalization Studies and Public Policy Programs. He received his B.A. (Hons) in Psychology from St. Francis College, and his M.A., Ed.M. and Ed.D. from Teachers College, Columbia University in the fields of comparative education and international educational development, with foci in peace education and philosophy of education. He is co-chair of the Peace Education Special Interest Group of the Comparative and International Education Society (CIES), and his research and teaching center on school violence, educational inequity, education for social change, youth empowerment, human rights and peace education, and postcolonial theory.

UNOY Peacebuilders has released the report “Youth Impact for Peace: Monitoring, Evaluation and Learning in Six European Youth Organisations.” Youth organisations all over the world are faced with on-going challenges in their daily work. One of these challenges is their organisational capacities concerning monitoring, evaluation and learning (MEL) practices. Considering the growing need and interest to improve such organisational capacities UNOY decided to engage in a long term, organisational development project, namely Youth Impact, with the ultimate aim of improving the MEL practices of youth peace organisations. This research report is the result of the first phase of the project. [continue reading…]

“The Human Rights Education Indicator Framework: Key indicators to monitor and assess the implementation of human rights education and training” developed by HRE 2020 is now available in French and Spanish, in addition to the English version that appeared in 2015. [continue reading…]

The school safety approach is used to evaluate a student’s potential to cause school violence, but critics say the practice is discriminatory and harmful. [continue reading…]