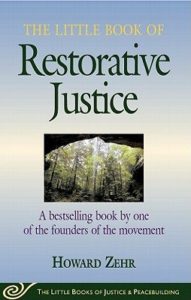 On December XNUMX, XNUMX, I visited a good friend and colleague at Leadership and Public Service High School in downtown, Manhattan. You can see the construction of the freedom towers at ground zero from the school’s windows.  My colleague is the dean of youth programs coordinating a restorative justice program at the school.  Restorative justice is a community approach to solving conflict nonviolently through dialogue, engagement and authentic participation of stakeholders of the conflict and the community.  Through trainings, dialogue and discourse with teachers and students, the school is engaged in community wide behavioral transformation.  Every day, students at the school are confronted with competing ethics coming from their communities and a broader society that considers violence a valid approach to problem-solving. Students often associate ethics of peace and nonviolence with ‘do-gooder,’ ‘white’ or liberal ‘tree hugging’ values.  In the eyes of many of the students, these values don’t seem authentic or possible in their community.  By pointing to the roots of nonviolent struggle from slavery, civil rights, workers movements, as well as individual people of color who led these movements such as King, Chavez, Parks, Gandhi and Bayard, they have the potential to connect with relatable peaceful and nonviolent role models.  It may be even more important to ask students to reflect on those in their local community who lead and model nonviolent possibilities for conflict.  There are many figures that advocate for nonviolent problem solving, struggle, and resistance because they know that violence will not transform our social system. Some consider nonviolence as a spiritual approach or a reasonable political strategy that does not diminish human life and dignity.    Explaining this, and including students in change processes has worked well for the Leadership and Public Service High School and community where I observed students and faculty discussing and offering nonviolent possibilities for potential conflict.   I learned and participated in restorative circles where I believe potential and deadly violence was averted by getting students to humanize each other through posing questions to help both parties realize they could have handled the situation differently.  The restorative justice circle entails discussion of the conflict with community members and consideration of a prevention strategy to peacefully deal with similar issues in the future.

We wrapped up the circle and I watched students and faculty who have become a restorative justice community interact – – sitting together discussing the school, college, their grades, all the while eating snacks and enjoying each others’ company.  Then a student received a text about the school shooting in Connecticut.   As events and information unraveled and the day progressed, I became even more horrified by the details of this tragic event. Looking out the window onto the freedom tower construction site, I remembered XNUMX/XNUMX and how as a peace education graduate student I spent most of XNUMX writing curriculum for an afterschool program in the aftermath of the tragedy.   We helped students to memorialize the tragedy through the production of small personal monuments that held individual significance to the students, placing them in public spaces and interacting with the community by asking for feedback. Then we compared XNUMX/XNUMX to other tragedies in history, and ended the semester with students engaging in activities with Arab-American youth in Brooklyn.  We wanted our students to humanize those who were being painted as the enemy.

The response to the horrendous tragedy of Newtown is different and yet similar in that violence or tools of violence are again being considered, i.e. the NRA’s proposal of providing armed guards in schools and to arming of teachers with assault weapons. Jesse Hagopian reported that NRA lobbyist Wayne LaPierre suggested, “The only thing that stops a bad guy with a gun is a good guy with a gun.” (XNUMX)   We should be reminded that violence begets violence.   For the first time in public-media discourse, I have heard the term ‘culture of violence’ being used. The idea of a culture of violence, as many peace educators and like-minded folks have been trying to get across for sometime, is that violence is deeply embedded in our culture. (XNUMX)   Nein! Das Seville Statement on Violence suggests that we are not naturally violent, although conflict is natural.  The Seville Statement was the culmination of research from scientists and scholars the world over about human nature and violence.   Yet, violence is so deeply grounded in our culture that the use of it has been rationalized and even considered ethical in some cases.

I believe the use of violence is immoral and unethical, and violates human dignity.    I tend to use Betty Reardon’s definition of violence as “intentional avoidable harm.” (XNUMX)   Reardon suggest that society has become “addicted to weapons.”  On every level of society, from international to local, amassing weapons constitutes gaining power.   Reardon (XNUMX) wrote, “Addiction slowly undermines well-being, providing immediate harm to the addicts and preventing them from understanding authentic human security.  Addictions fill a void, real or perceived, in the sources of well-being” (XNUMX). This addiction to weapons (and violence) pervades human culture in games, language, music, national celebrations and every other aspect because of the competitive nature of society.  Reardon continues, “armed conflict inevitably results from serious conflicts when weapons are at hand”.  (XNUMX) Weapons have contributed to a culture of violence that provides a false sense of security.  This false sense of security is the basis of national security and militarism; we are less secure. 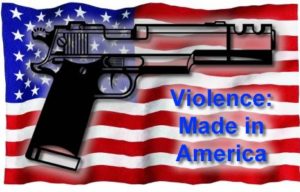 In light of this perspective, I have the following observations/conclusions: XNUMX) The hollow materialism, which makes us insecure (or at least the American Dream to attain material wealth) on macro and micro levels, assures some win while the rest loose.  The ‘security’ of weapons and violence is a hollow attempt to preserve one’s power and ultimately their sense of self.  So, rather than a second amendment historically situated in the ability to revolt against tyrannical governments, many choose to coalesce around a thin interpretation of a right to bear arms that is not appropriate in our contemporary world.  Use of weapons in our society is for the protection of goods, resources and rights that many in the rest of the world, i.e. the most insecure among us, do not possess.   To put it bluntly, violence (which can take many forms) and weapons are used by individuals, institutions and governments to maintain power.  XNUMX) While violence is concretized in the form of guns and weapons, research confirms that the symbolic violence of video games has a relationship to increased aggression. (XNUMX) Also related to violence are sports, music and other forms of media.  Students in general, and in particular those with mental impairments and disabilities do not have opportunities or capabilities for critical reflection about such violence.  We should be careful about blaming those with mental impairments, especially since the sane are providing them with weapons. XNUMX) Elsewhere I’ve written about the cognitive blindness of government elites who say, “do as I say, not as I do". (XNUMX)  Presidential administrations have directed the US military to wage war in Afghanistan and Iraq, Guantanamo Bay is still open, people have been tortured at US hands, there are drone strikes in Pakistan and Afghanistan killing innocent lives, police stop and frisk men of color in NYC (as well as around the country and in schools), and the peaceful occupy protestors are violently accosted by police. “On the day of the Columbine massacre, the US dropped more bombs on Kosovo than any other day”. (XNUMX) We must consider the possibility that the shooters from Aurora, Virginia Tech, Columbine, Arizona, Kandahar, and Newton (and many others) have witnessed and at some level internalized these many examples of legitimized violence as excuses or even subconscious rationalizations for their acts. Have they learned that violence is an accepted way of handling conflict?  Violence at many levels is legitimized by government and then accepted and compartmentalized by society depending on who is committing the violence and upon whom violence is unleashed.  We put bullying in one box and drone strikes in another. I see drone strikes as the US bullying Pakistan. What would be our response if another country sent drones to bomb American weapons manufacturers?

I don’t want more violence but I often wonder why more people are not committing atrocities in the light of the examples (blatant contradictions) we have before us.   I cannot see how the social acceptance of violence, as well as the availability of guns, is not part of the calculus of understanding school violence.  This is a blind spot we must address if we are to prevent further violence.  There are some immediate things to be done, but addressing these root causes are morally and ethically imperative as part of local, national, international school and community discussions toward a universal and global commitment to peace, human life and its inherent, self adjudicating dignity.

David J. Ragland, Ph.D. is a Visiting Lecturer Southern Illinois University at Edwardsville in the Learning, Culture and Society Program.  His research is focused on the philosophy of peace education and justice, the school to prison pipeline, school and social violence, urban education and critical race theory. David is currently writing a book on Betty Reardon’s concept of justice within her philosophy of peace education.  He was one of the instigators and coordinators of the Betty Reardon archive at the University of Toledo Libraries.  David has taught courses ranging from Philosophy of Education to Education for Peace and Justice and Worldviews and Ethics at Hofstra University, Teachers College Columbia, Marist College, and The University of Toledo.

Researcher Cheryl Lynn Duckworth is looking for U.S. public school students (ages XNUMX-XNUMX) who would like to share their views on the peace and security policies of their schools for a national survey that contributes to a study applying a human security lens to understanding and addressing conflicts and violence in schools.  This includes policies such as active shooter drills, the use of school resource officers (police) in schools, arming teachers, anti-bullying programs and peer mediation/counseling.   [Weiterlesen…]

Thousands of children of all ages marched to take a stand against crime and violence in schools. About XNUMX school children joined in what Minister of Education Anthony Garcia called a, ‘Walk for Peace’. “We are trying to promote a culture of peace in our classrooms,” said Minister Garcia, adding, “we are saying no to violence, no to bullying and no to crime!” [Weiterlesen…]