Secretary-General of the International Peace Bureau

“The world is over-armed and peace is under-funded. Military spending continues to rise every day. Just one generation after the end of the Cold War, it is now well above US $1 trillion. More weapons are being produced. They are flooding markets around the world. They are destabilizing societies. They feed the flames of civil wars and terror.” (Ban Ki-moon, UN Secretary-General, Opening address to the 62nd Annual DPI/NGO Conference – “For Peace and Development: Disarm Now!” 09 September 2009) 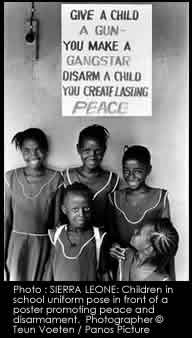 Jan. 18, 2010. All this week our screens have been full of powerful images and reports from Haiti. The most appalling, and sudden, large-scale catastrophe, and in a desperately poor country. Immediately – though already too late for many – the international aid community is gearing up for a massive response. The sums seem impressive: $100 million here, $100 million there…. until you remember that the military budget (in major states at least) is counted in billions rather than millions. A thousand times more. So it is a question of priorities. It is a question of politics, and values.

Values are what drive forward the cause of peace education. It is because we cherish ways of doing and being that are far from the dominant model that we feel the urge to communicate the urgency for change. To share with others our knowledge of the world, our skills, our visions, our practical plans.

It is now over 10 years since many of us met at The Hague for the extraordinary gathering known as the Hague Appeal for Peace. As many readers will know, this was the event that served as the launch of the Global Campaign for Peace Education – a campaign now needed more than ever. We have lived through ten intense years: against the backdrop of the “9-11 landscape” with its wars on terror and its erosion of civil liberties, we have witnessed rapid globalisation, the rise of the ‘BRIC’ states and the reshaping of geo-politics; the second internet revolution based on social networking, interactivity and the smartphone; a serious crisis in the global economic system; and above all, the challenge to the entire biosphere posed by climate change. It already feels like a very new time.

The IPB was a key part of the organisation of the Hague Appeal, and our response to the challenges of 9-11 drew on ideas that were already articulated in the 50-point ‘Hague Agenda for Peace and Justice’. By developing a new project on human security, we aimed to help amplify the voices of dissent against the Bush-led national-security doctrine and the justifications for new rounds of warmaking. This project then led on to a major long-term programme, launched in 2005, under the title Sustainable Disarmament for Sustainable Development. This focuses on three main areas of work:

1. The struggle to reduce spending on the military sector in favour of increased investment in sustainable development – including climate change mitigation and adaptation.

2. Efforts to demonstrate, and to lessen, the effects of weapons of many types on poor communities, esp. in conflict zones. In this work we co-operate with a range of coalitions working to abolish or limit different weapons systems.

3. A set of additional issues, such as the militarisation of aid, the spread of military bases, gender perspectives, and above all, the new justifications for militarism that flow from intensified resource competition and the effects of climate change.

Among the many activities we have been developing are conferences and seminars to bring advocates together; publications outlining the facts and arguments necessary to gaining attention to these issues; networking building; dialogue with development/environment organisations; and media work.

Each of these issue-areas also has an educational dimension, and among our plans for the coming year or two is to develop teaching and learning materials around these themes. We need the expertise of members of the GCPE network to help us devise, test and distribute such materials. So if you have some good ideas, please get in touch!

In many ways this is a promising time for the kind of work we have embarked on. More than ever, it can be argued, public opinion is questioning the way politicians spend our money. More than ever, there are serious doubts about the military method of responding to terrorism. All over the world, people understand that the existing system of ever-more production and consumption cannot go on indefinitely and that we need to re-order our priorities.

But in order to be successful – either in the work that IPB has chosen to do, or indeed in the wider processes of social transformation – we will need to find new ways of working, with sharper thinking and more inclusive methods. We will have to balance our urge to voice loudly the need for change with the wisdom of listening carefully to those around us:  allies and opponents, fence-sitters and convinced advocates, the young and the less-young.

The sum of all the changes we seek is often described as a Culture of Peace. It’s as good a term as any, in my view. My hope is that through peace education programmes, through political struggles and projects, through understanding how the world’s systems interact, we can together build a community to embody and sustain our visions in the challenging years ahead.

MAPTING is a free mobile App produced by Soka Gakkai International and Earth Charter International. It is a tool to discover the Sustainable Development Goals and promote sustainable actions and projects through picture & video sharing. [continue reading…]

‘A Piece by Peace: A Sustainable Peace Dialogue’ was co-hosted by Africa Unite (AU) and the International Peace Youth Group on the 23rd February in Cape Town, South Africa. The topic of the forum was: How can we as youth, working with government ensure that we build safe and peaceful communities and create a culture of peace enshrined in the Declaration of Peace and Cessation of War. [continue reading…]

The Challenges of Climate Change Education