[icon type=”glyphicon glyphicon-share-alt” color=”#dd3333″] Visit World Beyond War for purchasing and download options of A global security system: an alternative to war [well type=””]Editors note: This review is one in a series co-published by the Global Campaign for Peace Education and In Factis Pax: Journal of Peace Education and Social Justice toward promoting peace education scholarship. [/well] 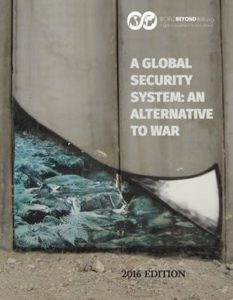 A global security system summarizes some key proposals for ending war and developing alternative approaches to global security that have been advanced over the past half century.

It argues that nuclear and other weapons of mass destruction undermine human survival and ecological wellbeing and thus render war untenable. Moreover, the increasing role of terrorist and other non-state actors in waging acts of mass violence renders state-centric solutions inadequate. The nature of warfare has changed; wars are no longer only or even primarily waged between nation states. Thus, nation states alone cannot assure peace and security. New structures are needed that are global in scope and include nongovernmental and intergovernmental actors working in concert for common security.

The major components of common security outlined in this work include:

The report also includes a section debunking old myths about war (e.g., “It is impossible to eliminate war”, “War is in our genes”, “We have always had war”, “We are a sovereign nation”, “some wars are good”, the “just war doctrine,” “War and war preparation bring peace and stability”, “War makes us safe”, “War is necessary to kill terrorists”, “War is good for the economy”).

And it includes a section on ways to accelerate the transition from a war system to an alternative security system, including networking and movement building, nonviolent direct action campaigns, and educating the public and decision and opinion makers.

The report is interspersed with highlighted quotes by authors, thinkers and doers related to these proposals. It also contains facts highlighting the need for alternatives, indicting the progress already made and reasons for hope.

What seems to me to be missing from this report, and is most needed if these strategies are to be employed, is a shift in consciousness and worldviews–the context in which these different peace and security strategies might be seen and applied.  The old and still dominant vision is that peace and security is achieved within an atomistic system of competing nations states where each state must ultimately rely on military force for survival. This worldview leads to one set of policy options. The new (but yet oldest) vision for peace and security, held by a minority but growing number of people, arises from a consciousness of the oneness of the Earth and interdependence of all life and all human communities and opens to a different set of policy options.  Our future will be shaped by which of these two clashing worldviews ultimately prevails.

A major challenge for those seeking alternative strategies for peace and security is how to expand and deepen this second type of consciousness and move it into policy arenas at local, national and global levels.  Changing worldviews is not just one among thirty or so strategies to list in a report such as A Global Security System,  It is rather the overarching consciousness and framework a within which all strategies need to be assessed and chosen.

An appendix refers readers to resources, books, movies, and organizations that can provide additional information. This section should be expanded in future editions. Many valuable works that should be here are not, including by the United Nations, the World Order Models Project, Kenneth Boulding’s Stable Peace, and other works that while earlier in time, offer important visions and strong analytical foundations for alternative security systems. This section also needs to include more works with perspectives from non-western cultures. Missing too, are works from diverse religious and spiritual perspectives. Alternative security approaches–a new world order–grows from within (not just in political arenas, but within the hearts, minds, and cultures of many diverse peoples). While space is a consideration, it is important for readers to know that significant thought on these issues has come from a great diversity of sources.

Another recommendation for future editions is to add a section with questions and recommendations. For example, how can peace builders include dialog with far right and nationalist social and religious movements as part of an inclusive process while upholding a global vision? What is the role of social media in building and maintaining a new global security system? How can human consciousness be developed and expanded related to our role in planetary community?

Still, this is a valuable summary of ongoing work by thousands of people to forge a more humane and ecologically sustainable future. As such it is also a testament of reasons for hope.