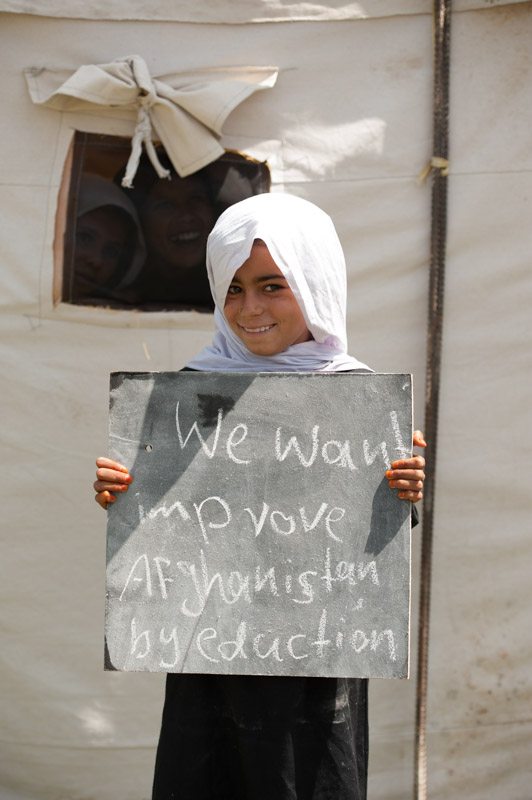 In the eastern provinces of Afghanistan, where agriculture is still the main source of income, semi-nomadic Kuchi  tribes still move with the seasons, following ancient cultural traditions. In the past these tribes roamed across the region in search of grazing grounds for their herds of sheep and camels, but government borders, private land, and changing climate have drastically reduced the number of people who still travel, and the places they can go.

Kuchi people are some of the poorest and least represented people in Afghanistan. School isn’t traditionally a part of the nomadic life, so many adults in the tribes are illiterate. However, parents can see the benefits of education and want more than anything for their children to read and write.

Bringing Education to the Kuchi Tribes

CAI began supporting several Kuchi tribes in 2011. Several adults had earned an education in their youth, and they wanted to make it easier for their children to access skills that would become more necessary as they grew up. To educate a nomadic society, the school had to be nomadic too, so CAI provided tents, portable black boards, school supplies, and even provided a teacher and motorcycle so the teacher could travel with the Kuchi tribe easily.

In the beginning only 110 children attended the school, just 10% of the Kuchi tribe’s population. Because most of the adults grew up without education, it took some convincing to allow their children to attend school instead of going to work tending the animals.

Six years later it’s clear this sentiment has changed. This spring Star of Knowledge (SKO), CAI’s partner in Afghanistan, distributed 87 new tents to house over 12,000 students in different tribes throughout Nangarhar Province, through the support of CAI donors. They also provided white and black boards, water jugs, and chairs.

“These supplies were distributed to ten different areas in Nangarhar where conditions were so bad there were no [shelter] to use as rooms, no carpets to sit on, and no stationary for writing,” says Asadullah Azimi, Senior Education Officer at SKO.

The tents and generosity of CAI donors are appreciated immensely as children sit down to study, protected from the elements and with plenty of notebook paper to do their homework.  Gulalai, a sixth-grade girl in Kama District is grateful to be in the new tent classrooms.

“When there were no tents, we were studying under burning sunshine and rainfall. Sometime even I [thought about leaving] the school and not to attend it anymore,” she says.

Asadullah also relayed a letter from students in Bati Kot who are thankful for their new tents.  “We love education. We love our land. We are children of today and the future of tomorrow. Consider us as your own children. Please do not forget us,” the letter reads.

It’s not just the students who are excited for new tents and school supplies, the headmasters and parents are thankful to be receiving the supplies they need to educate their children.

Sharafat, the principal of Hazar Baig School is thankful for the support the school has received. “We are very happy for these tents and would like to thank Asya-e Markazi (Central Asia Institute) and Sitari Irfan (Star of Knowledge Organization) for their assistance.”

Asadullah receives messages like these each time he distributes the tents and supplies from donors. Even the Education Department of Bati Kot sent him home with messages of thanks. “The tent schools with their facilities have not only resulted in a secure learning environment for students but also in an increase in enrollment,” says Abdul Habib Ghazi, head of the Education Department.

“The school’s enrollment rate has doubled this year compared to that of the previous year. We are pleased that so many students were equipped and provided with a learning environment.”

Schools Begin With Care and Support

Over the years CAI has asked our supporters to help these unique people. By providing them mobile schools, we can ensure that children learn important skills while still preserving their nomadic culture. This means the next generation will be better able to provide safe passage as they travel, to ask a fair price for their meat and fabrics, and pass on these important skills to their children.

The Kuchi people face threats from drought, decreased grazing lands, and war. With education they will be better prepared to navigate these difficulties and preserve their culture. To learn more about the history and the traditions of the Kuchi people visit http://minorityrights.org/minorities/kuchis/

Get Them ALL Out!!! 4 simple things everyone can do now.

Every Afghan citizen at-risk – women, men, children, the old, those with disabilities – has a right to claim asylum. We must get them all out. Full and complete evacuation is a moral and practical imperative. Here are 4 simple actions everyone can take to support this effort. [continue reading…]

Sign our letter to support at-risk Afghan scholars and students

The present peril of Afghan scholars and students threatens their lives and security and possibilities for a more positive future for Afghanistan. This initiative seeks to confront those threats by making it possible for more of them to accept invitations to American universities. [continue reading…]

Peace Education in Afghanistan: A Comparative Study of Conflict and Post-Conflict School Textbooks