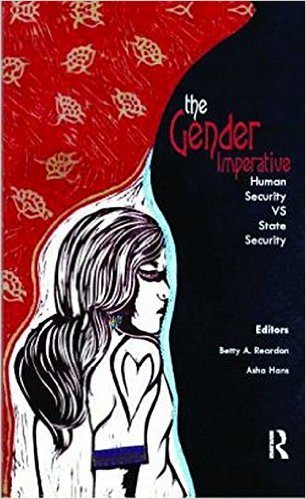 “For this, in sum, is the essence of human security, wellbeing made possible through the elimination of all forms of violence, assured by institutions designed specifically to achieve and maintain well-being; in short, demilitarizing national security and bringing an end to patriarchy” (p.33). These words sum up the conceptual core of the book. It argues that human security derives from the experience and expectation of wellbeing of people and the planet which sustains them. The book also asserts that human wellbeing depends on four essential conditions for the continuation of human life: a life-sustaining environment, the meeting of essential physical needs, respect for the identity and dignity of people, and protection from avoidable harm and expectation of remedy for unavoidable harm.

It is a fact, however, that the prevailing system of state or national security is incompatible with and is the foremost obstacle to both human security and planetary security. Hence, the challenge, raised collectively by the various articles in the book, is a call to transform the present system into one that is specifically designed to achieve human security. The collection of articles explores the concept of human security from a feminist perspective and expresses two main propositions. The first of these is the proposition that if human security is to be achieved, patriarchy has to be replaced with gender equality and a new thinking about power, because patriarchy privileges a minority of men who rationalize the harm they cause to those over whom they have power. The second proposition is about the ultimate abolition of war as an institution, in favor of nonviolent structures and processes for resolving conflicts and achieving goals.

The first three essays in Section 1, “Confronting the Militarized State Security Paradigm: Human Security from a Feminist Perspective” serve as a “conceptual core of the inquiry into human security.” They inquire into the roles, status, and oppression of women in the prevailing patriarchal security/ war system, based on documented experiences.

Section 2, “Patriarchal Conditioning to Violence and Human Insecurity,” has four articles. The first three give us examples of women’s political exclusion that allows their abuse in conflict and post-conflict situations while the fourth reveals media as a powerful tool for conditioning publics to accept patriarchy.

In Section 3, “Militarization/Demilitarization: Eroding and Promoting Human Security,“ the essays give examples of women’s responses to militarization and its violation of human security. The initiatives discussed cover different settings: Bougainville, Guam, Okinawa, Afghanistan and Russia.

Finally, Section 4, “Alternative and Transitional Approaches to Human Security,” consider alternatives to militarized state security towards a comprehensive, gender-equal human security system. The four essays suggest several approaches: an international standards approach such as the UN Security Council Resolution 1325; applying women’s concepts of security revealed in a study in Jordan; using health as an important indicator of human security/well-being; and establishing human security measures in a strategy to end an active conflict.

The book is an excellent contribution to the discourse on human security and to the vision of a truly secure humanity and planet Earth. Skeptics may say that the vision of the authors is utopian but this attitude is in itself a characteristic of patriarchal thinking, dismissing alternative thinking and proposals as unrealistic and impossible. Once again I quote from the editors, who say with conviction: “One of the core purposes of this book is to reclaim utopia in its original sense, as a diagnosis, indeed, a denunciation of the injustices and follies of the dominant order” (p. 1).